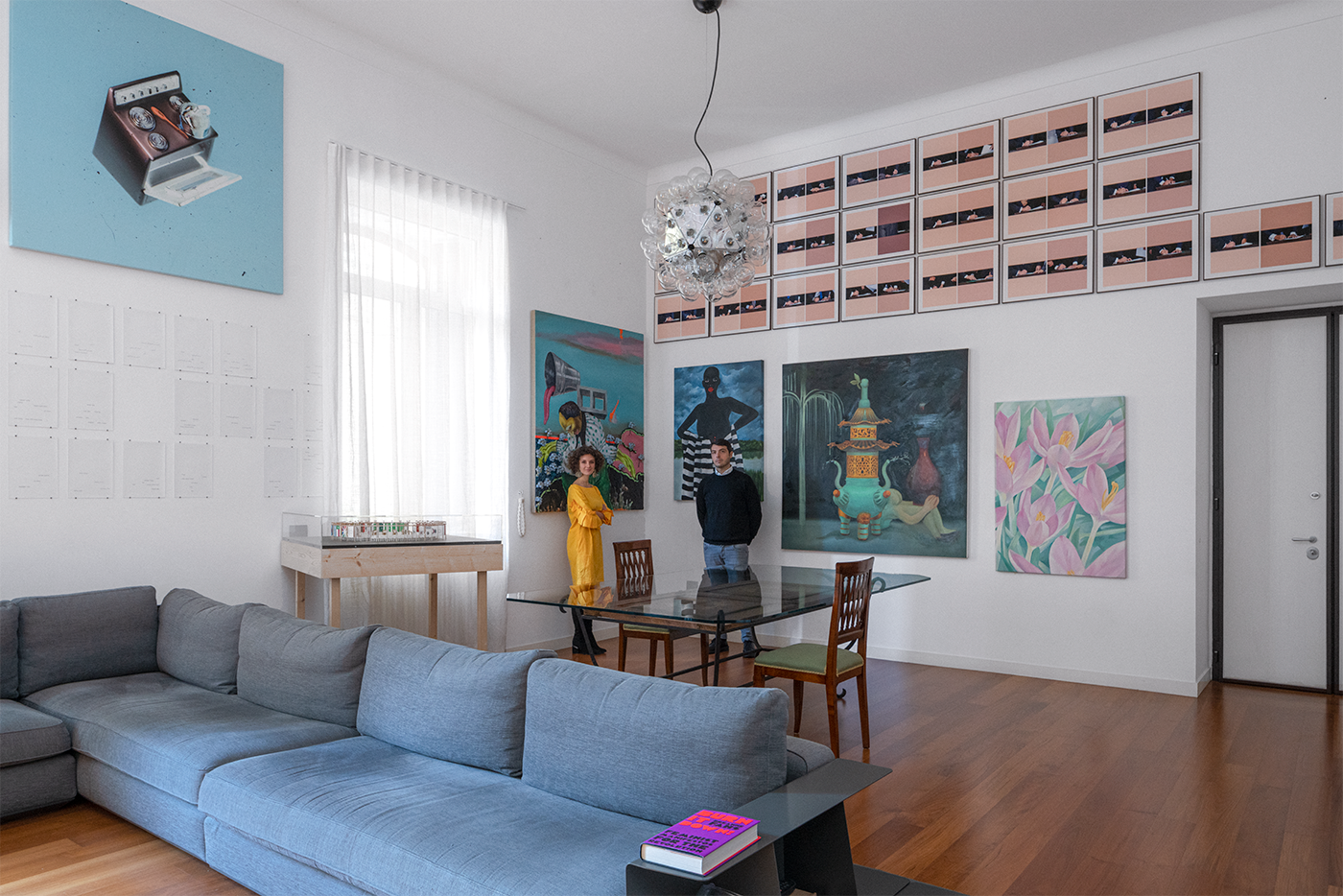 Sveva D’Antonio and Francesco Taurisano are very dedicated art collectors who are custodians of Collezione Taurisano, an art collection of more than 400 artworks. Originally a collection of 20th-century art, the collection was started in the last century by Paolo Taurisano, Francesco’s father. Under Sveva and Francesco’s direction, the collection increasingly consists of artworks created by living artists, many of them still in the early stages of their careers. They are a prime example of collectors who are deeply passionate about the artists, fully immersed in the art world, and prioritise the needs of artists in the way they collect art. where’s the frame? had the pleasure to talk to Sveva, who is in Milan right now, about how her interest in art started at a very early age, how she became a collector, and the big responsibilities of the collector in our current times.

Sveva D'Antonio is a former gallerist who has a background in Art History. Growing up in Naples, she was always surrounded by art. Her love for art started at an early age when her mother would take her to see art at museums and galleries around Naples. “There is a strong contemporary art tradition in Naples, it’s embedded in our DNA”. One of the galleries she enjoyed was Lucio Amelio’s, who in the 80s, introduced Joseph Beuys to Andy Warhol, and was a gallerist who brought a lot of leading artists to Naples, such as Robert Rauschenberg, Keith Haring, and Cy Twombly.

Although she has always appreciated art, a new phase started when she saw Charlotte, a photo by Leigh Ledare at an art fair in Copenhagen in 2014 and it really spoke to her in a new way. “Leigh Ledare is a fantastic artist from California. He’s very famous for the portrait of his mother who was a prostitute. It was the last piece in the series and when I saw it, something was burning inside. It trigged something very emotional. It was about relationships with mothers, childhood, and sexuality. It spoke to me in a strong way, and we had to buy it.”

Custodians of the now

Being a collector, you don’t just enjoy looking at art in museums and galleries. Sveva explains how “There is a trigger that forces you, it’s not enough to look at art and go home, you have a strong feeling you want to keep it to yourself forever.”

Under their direction, most of the artworks in the Taurisano collection are addressing the social and political issues pertinent to our times. Most of the artworks they collect art by female artists. The reason they’re drawn to living artists that talk about the now is that it tells something about contemporary society, in other words, “It's about our vision about this time.” In Sveva’s opinion, it’s not worrisome that this might challenge the idea that art should embody some sense of timelessness. “You might think that it be tricky because you can lose some aura of eternity. But I don’t think so. Talking about now is very challenging for the artist but it’s truly what interests me. You build geography of emotions, of things that happen, of relationships, which can be of interest in the future, you never know what’s going to happen.”

“Art is our life. All our friends are collectors, gallerists, curators and artists.”

To stay on top of what is happening in the art world, Sveva explains how “you have to be local and global at the same time, this term glocal, it really has meaning. You need to know what the galleries are doing, and what the non-profit spaces are doing, to foster a 360° vision of the art world. You can not only rely on the big institutions and galleries. You’re going to get more discourse from the galleries that are led by young people that can be of interest to people our generation.”

With the art market becoming bigger and bigger in the last decades, and with there no rules or regulations in place, it’s up to the collectors to conduct themselves in an ethical way. As Sveva points out, “I always say, being a collector is a big responsibility – it’s not something you should take lightly.”

“I always say, being a collector is a big responsibility.”

So, although there are not any strict set of rules, she reveals how “A good practise should be to have an ethical code internally that you follow. We try to, as much as we can, to put the artist at the centre. What do they like, trying to understand with him or her how to support, how to connect.”

One of the ways how they can support is by helping artists to build relationships. The ability of an artist to grow depends not only on the quality of the practice of the artist but also on whether they foster the right kind of relationships. As Sveva makes clear, “Networking and relationships are key as well, it’s all about your environment, the people you surround yourself with, to build your career. We always try to introduce artists to the right people.”

Talking about how they build a relationship with the artist after buying the work, she says “we like to also involve the artist in our everyday life.” Many artists, like Sara Rahmanian and the artist collective Apparatus 22, are very dear friends of Sveva and Francesco.

And perhaps most importantly, they don’t resell the works. Reselling, or flipping artworks for profit after a short time of owning them is harmful to the artist's career, especially if it’s in an early stage (this is part of a larger conversation about flipping artworks, which you can read more about here)

They don’t only see it as a great responsibility to support the artists in a very active way, but also the other players in the art system, galleries, curators, etc. The way they see it, “we always talk about the art system and not about isolated entities.”

There is no way around talking about how Covid has impacted Sveva and Francesco's art lives. Before Covid, they travelled from city to city, to visit artists’ studios to go to art fairs and exhibitions. Then Covid hit. “I stopped travelling,” Sveva says, “I stopped doing different studio visits from all the different art schools. Every year, we were going to Frankfurt, going to Ghent, London, New York.”

She started to wonder how they could remain connected. Social media happened to be the solution. They used Instagram over the different lockdowns to stay in touch and to arrange zoom calls for virtual studio visits. “We were seeing that artists really wanted to talk and show their work, the production what they were doing at the time, we were doing these talks on Instagram Live. It was a lot of fun. People that we’re not into contemporary art really liked it. Artists were commenting about music, or other cultural expression, and it was a nice way to reach people that are not so near the world of art. It was a nice way for artists to feel supported.”

And now, when life slowly is starting to feel more normal again, the question arises if you go back to the rushed life. “We’re starting to travel again to see shows in London, in Paris, Francesco went to Vienna. We’re slowly starting again. I miss being in New York, doing studio visits, and going to exhibitions. I’m still in contact with many artists there. There is a need of meeting people, of gatherings.” But she also discloses how a slower-paced art world and market is beneficial to everyone.

Because artists need a lot of time to read, the quality of the work will increase if they don’t have to rush to produce a lot and can spend more time on their research. “In the last years, before Covid, artists were so consumed by this fast market. The quality was going down very fast. Artists need the time to read and to think. I think the quality has been raised consistently after the outbreak. If you don’t take the time, you can only repeat yourself. If you keep this loop of repeating yourself, artistically speaking, you die.”

But Sveva is hopeful that the next generation of artists that are entering the art world will not be taken advantage of and sucked into this fast-paced world. “This new generation of artists that were born after 1994, they have strong personalities and an informed view of society. I don’t think they’re going to let the art world exploit them. The artists that are supporting each other, giving advice, it’s going to be helpful.” We can only say that we like to see that happen too.

Thank you very much Sveva for taking the time to speak to where’s the frame?