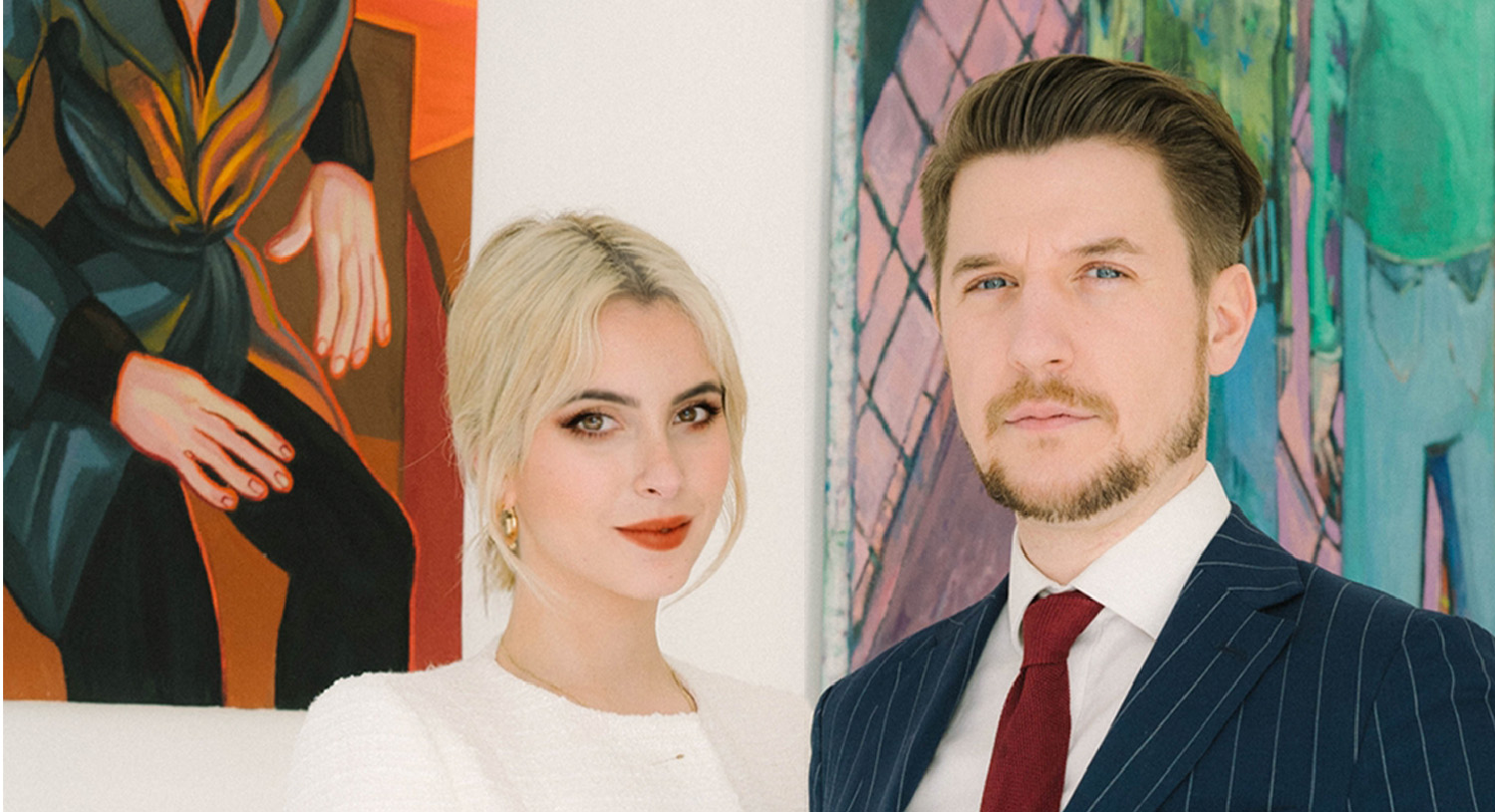 Collector couple Laura del Arco and Oliver Elst go above and beyond to help develop the artistic careers of a new generation of artists entering the scene. They see it as their mission to collect and promote art from them and give them a stage in the international art scene, by collecting their work, organising residencies, encouraging their friends to collect, and above all, making their collection public in their art space PRIOR. where’s the frame? had the pleasure to talk to Laura and Oliver, who are in Berlin right now, about their journey as a collector, the different ways they support artists and why.

As is true for many people in the arts, a passion for art started for Laura and Oliver at a young age. Laura got introduced to art because her mother liked to paint. “I remember the smell and beautiful things to experience, something to share with her.” When she got older, she began to go to museums and buy postcards of her favourite paintings in the museum. “My first collection”, she jokes and continues: “ I didn't expect that someday I would be able to have some art living with me, to experience it from way closer. Feel very grateful for this experience.”

THE FOCUS OF THEIR COLLECTION

While they both collected artists who were exploring a range of subject matters, at some point, because of certain personal experiences, they realised that they were drawn to a specific kind of artist and subject matter.

Oliver started his Cuperior collection in which he focuses on collecting art from African and African Diaspora artists. His interest in art from Africa grew from realising how there was a discrepancy in how artists are depicting their continent right now, and what he saw growing up. “My dad always travelled a lot to Africa, and I always saw pictures of the continent from him. I always saw a lot of more traditional African art and tribal art. Later, I realised that a lot of young Africans want to show a different Africa. It’s a new generation, they want to show their continent in a contemporary way.” He considers the artwork that started the collection to be an original painting by  Aboudia, an American-Ivorian contemporary artist based in Brooklyn. Cuperior, the name of his perfectly describes the philosophy of his collection. The word is a combination of the Latin word "cupere", which means desire and "prior", so prior to the rest.

“A lot of young Africans want to show a different Africa. It’s a new generation, they want to show their continent in a contemporary way.” - Oliver Elst

Living abroad for many years, when Laura moved to Shanghai, she tried to use art to gain a better understanding of the country she lived in. But when she was there, she was more drawn to women and non-binary artists who were exploring female representation and a sense of belonging. “I engaged much more with female representation, in abstract and figurative ways that represented female, non-gender specific, or queer visions of women. I realised that art could help me to better understand my personal experiences and experiences as a woman. It's something I could relate to and help me throughout my life.”

She also started to think about how, historically speaking, women have been depicted within the context of the male gaze. “Why is a woman an object to be painted through the eyes of the man?” she questioned, “I would like to see women making it. I want to see women empowered; that’s what we are. Art must represent us fairly.”

A sense of belonging is entangled in these experiences of utilising art to understand the female experience. “I realised that as a young woman living in Italy, China, and now in Germany, I thought about my experiences in each of these countries in relation to a sense of belonging. What does belonging to a European country and living in China make me feel? Do I belong where I'm born, where I feel at home or where I’ve grown as an independent self? ”

After processing all these ways of thinking, she started her Del Arco collection. She focuses on collecting art from artists exploring these different modes of representation: identity, gender, female and self-representation and concerns of belonging. The piece that started this focus in the collection was a work by Nadia Waheed, who is born in Saudi Arabia but originally from Pakistan.

It doesn’t come as a surprise that Laura and Oliver met each other at an exhibition opening. They were at Gallery Perrotin in 2019 and living in Shanghai. They bonded immediately. When the pandemic started, they moved to Berlin and started working from there.

During the different lockdowns, they continued to engage with art and artists. They kept on collecting and did virtual studio visits and Instagram Live sessions with artists. Oliver also started the Cuperior Artist in Residence, in which he invites an African or African diaspora artist to do a residency in Berlin or Barcelona for a couple of months.

“Art is our passion, our jobs are creative and we love what we do but art is our priority.” - Laura del Arco

Getting more and more art advice requests, their collector friends started to ask for their advice on who to look out for. “We would suggest artists on our radar in PDF form, and let them know which works we were going to buy,” Oliver explains, “Young collectors buy differently. We’re open to working online, sharing a PDF” Having a very global network, Laura reveals that their “network of collector friends is spread out over the world: Germany, South Africa, Korea, Qatar, China, Spain.”

In the meantime, they came to the conclusion that they see it as the responsibility of a collector to make sure art remains visible to the public and look for multiple ways to continue supporting the artists in the collection. They became more and more aware of the power they had as collectors to help artists grow. “Collectors have so much power. Galleries would listen to collectors instead of other galleries. They have the power to get artists exhibitions and new opportunities.”

The combination of the awareness of their own position and the feeling of how much they had missed experiencing art in real life fuelled the desire to share their collections in a public art space publicly. Laura explains, “When lockdown stopped, we realised how much we’ve been missing seeing art in person. Why don't we continue what we’re doing and do it in person. Why don’t we share our collection with the world?”

So that’s what they did. Laura and Oliver opened PRIOR, including two spaces, one in Berlin and one in Barcelona. “The general idea”, Oliver reveals, “is that we’re showing our private collections open to the public on one floor of the space and on the other one we reserve it to develop curated exhibitions in collaboration with artists in our collection and collaborate with international curators that share our vision and purpose “

The kind of exhibitions they put on alternate between a solo show of a residency artist and a group show. Recently, Laura started the Del Arco residency in which she invites an artist that works around the focus of her collection, beginning with Kristy M Chan.

Laura tells why they love to organise the residencies: “We thought, its much more of an experience and understanding of the artist, to have them here, to experience it from the start and their process. To get them out of their comfort zone and bring them to a space where the priority is to explore something new, to not have the pressure of the art market behind you, the result is this beautiful show. Among all the things I do, I’m most excited about the residency, it’s art in its purest essence.”

When asked why they take such an active role as collectors, residency organisers, and curators, they both make clear that they both love being involved and supportive from the beginning of artist’s careers.

“After collecting for years, we realised that art collectors have a responsibility to not only collect  works of art if not to support proactively and widely the artists in the collection.”

Oliver reveals that it’s about building a long-lasting legacy “it’s to have an impact. I say that you do something and that you have long-lasting footsteps. Sounds idealistic and high, but I don’t want to leave this world and not have my footsteps in the world.

When asked about the next steps, they reveal that they’re in the final stage of converting PRIOR into a foundation. They explain that “We realised that it protects the artists very much to be in an establishment. Because our effort is to make more institutional artists, by giving them a solidity of a foundation, that’s good for them.” Laura also reveals that they want to bring the concept of PRIOR to different cities “to London, Ghana, Akkra is getting a bigger art scene and want to support that from the beginning. Also Seoul.” And lastly, she asserts, “Long term, a museum.”