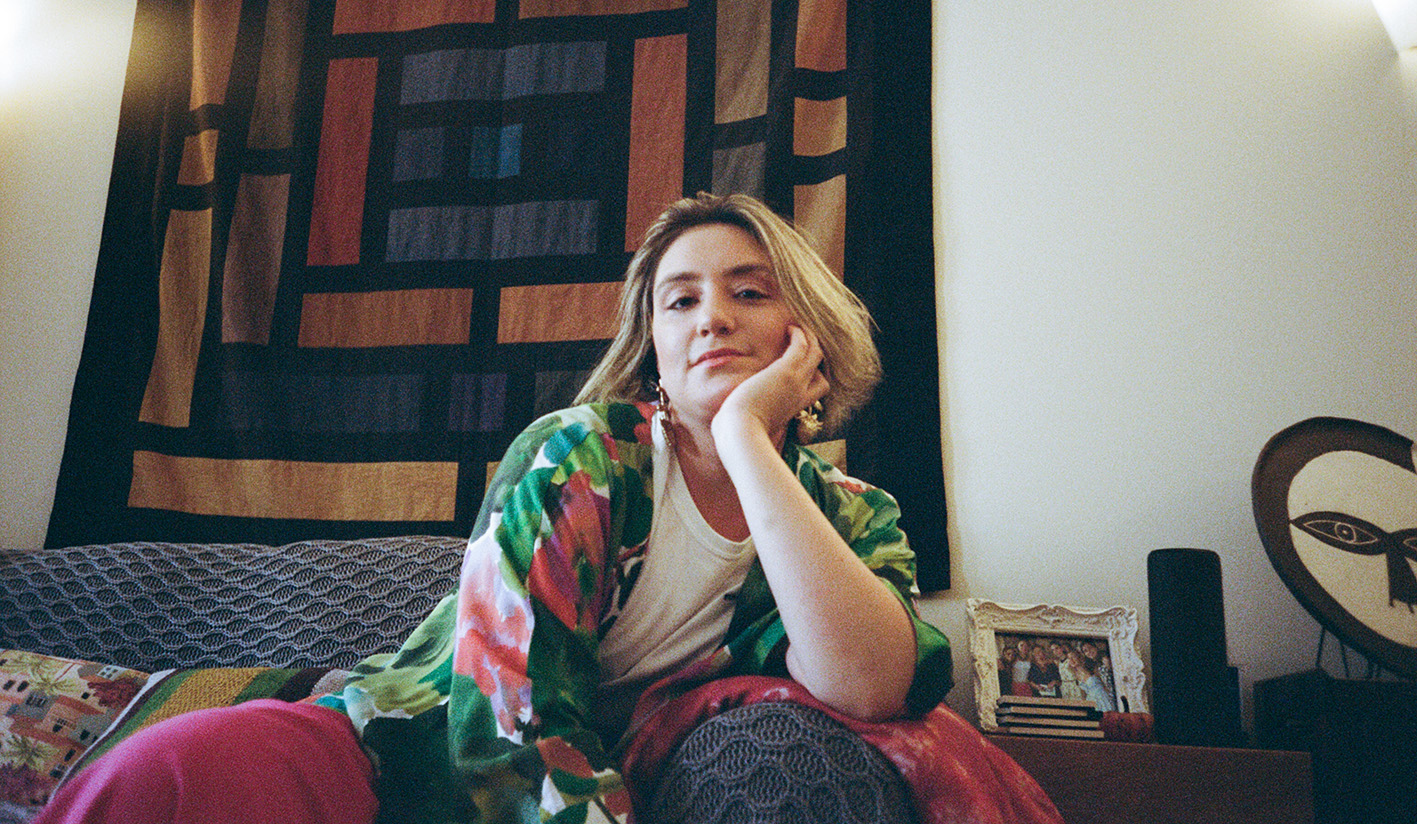 Living and working between London and Istanbul, Huma Kabakcı is a second-generation collector, independent curator, and founding director of Open Space. In different ways, Huma takes an active role in the arts and does not only support emerging artists but a wide range of creatives in unexpected ways and unexpected spaces. where’s the frame? had the pleasure to speak to Huma in her home, surrounded by her collection, to speak about her interests, the difference between a first and second-generation art collector, and her love for combining food and art.

As her living room is filled with artworks, artbooks, philosophy anthologies and keepsakes of her curatorial projects, it’s clear that Huma lives and breathes art. Carefully taking us through the works she has collected over the years, she shares why each artwork speaks to her. Ranging from institutional artists, like Mona Hatoum and Kader Attia, to recently grads, Huma has collected works at fairs, and galleries, got pieces gifted from artists or bought them directly from their studios.

For Huma, it’s important to note that she is a second-generation art collector. Her late father Nahit Kabakcı had been collecting since the 80s named the collection, the Huma Kabakcı Collection, after his daughter. Talking about this, she explains how she perceives how a second-generation art collector differs from a first-generation art collector. ‘It means I am less brave and haven’t made the big step to start a collection.’, and continues, ‘Having said that, there are many responsibilities as a second generation collector (and only child) I had taken over such as building relationships with museums/institutions for loans, taking care of the collection, cataloguing, acquisitioning and deacquisitioning, making sure everything is insured, kept in good condition.’

Huma’s late father focused on collecting paintings by artists from Turkey, Russia and Central Asia, but also included works from Robert Rauschenberg and David Hockney. Like Huma would go on to do, Nahit had had an active role in the art. He founded a gallery, organised art competitions and realised different collection exhibitions in museums.

Huma shares ‘I unfortunately lost my late father at an early age of 19 years old, not knowing what I wanted to be or who I really was.’ With the encouragement of her mother, she applied to the Royal College of Art to gain more knowledge in curating after studying Advertising and Marketing. ‘I then realised I really enjoyed curating and visiting artists' studios more than just acquiring.’

Inevitably, Huma has been drawn to different kinds of artists, creative practices and media. ‘I focused more on female artists, subject matter and materiality, whereas my late father was big on paintings, stories and Central Asia as a region since he travelled there. I saw a massive gap in gender in the collection, so I wanted to focus more on that without changing the original intent and vision. But naturally, we are two different people who lived/living in different generations and cities, that play an important role in a private collection.’

These differences were foregrounded in a show Huma co-curated at the Pera Museum with Turkish art historian Esra Alicavusoglu titled “Memory and Continuity”. ‘In that exhibition, we made a selection of fewer than 100 artworks and tried to group them in themes rather than geographical regions and make the thread between two generations.’

In her home, Huma shows us a photograph by Mona Hatoum and we both express how much we admire her practice. ’I was in awe of her earlier 90s-2000s works. This work consists of a photograph of a man's hirsute back, the hair soaped and wetted and swirled into patterns which suggest the brushstrokes in Van Gogh's paintings. I really love the fact that in the 90s, Hatoum made a number of pieces demonstrating a lighter side to her work, finding ironical or natural humour in areas connected with more serious concerns such as patriarchy and gender roles.’

Another work she shows is by Mandy El Sayegh. She tells how ‘shortly after coming across Mandy El Sayegh’s Chisenhale show in 2019, I fell in love with her diptych titled Limits of measure based on her intimate but complex relationship with her own mother.’

Talking about the importance of collecting in a responsible way, she says ‘as a collector, once you make the choice to actively collect and build a collection and when the artworks overfill the walls, you have a social responsibility to open it up to a wider audience. Many people think it is just a way of living, a hobby, an access point to private art parties and studio visits, but unfortunately, it shouldn’t be perceived as that.’

For her, an example of a collecting approach done right is the collector couple Dorothy and Herbert Vogel. ‘I’ve been interested in how the role of the collector or patron changed over time. I was very much drawn to the Vogels (Dorothy and Herbert Vogel), who worked as civil servants in New York City for more than a half-century while amassing what has been called one of the most important post-1960s art collections in the United States. They, later on, donated their collection to the state museum National Gallery of Art. I really admire that.’

Praising her late father’s way of collecting, she shares ‘I also really admire that my late father had the vision and wanted to leave a collection to me instead of just property or financial investment. Art can enrich our souls and everyone around us, but there should be the social act of sharing too. I don’t think everyone is aware of the social responsibility a collector has whilst acquiring.’

After graduating from the MA in Curating Contemporary art at the RCA, Huma started Open Space almost six years ago. ‘Open Space is a small, itinerant organisation that supports emerging creative practice,’ she explains, ‘promoting dialogue in the arts through an annually recurring programme of dynamic projects in unexpected spaces.’

When she started it, she called it Open Space Contemporary and ‘It was very experimental back then. I saw it more as a platform to bring different creatives together and further artistic discourse outside the confined walls of a gallery.’ Huma tells us that even though Open Space developed over time, the branding, the name (dropping contemporary at the end), the space ‘never lost its initial ethos’. Impressively, up until now, with Open Space and independently, she has collaborated with more than 100 cross-disciplinary practitioners and 20 international organisations.

When asked whether she decided to create her own space because she felt there was something missing in the art world, she partially refutes that. ‘I wouldn’t necessarily say it is missing, but I think there should be more open discussions and conversations around diversity, gender politics, social class systems, sustainability and world problems.’

Pointing to how the pandemic has highlighted a lot of inequalities, she continues, ‘more than two years onwards, now it seems that it has all been forgotten and that we are back to our old habits such as; travelling to every biennial/art fair, keeping busy and speculating about the market. I say “we” because I think it is a collective problem. But no, I don’t take an active role because I think I am the missing puzzle piece in the art world. I take a role because I have this naive outlook that art can change the way we think, can bridge things together and open up to many different possibilities and collaborations.’

Huma’s personal history feeds into her curatorial practice. ‘As a woman living abroad, away from most of my family and having questioned my identity on many occasions, it only comes natural to be interested in these topics. The last two exhibitions I curated at Sapling and Cooke Latham Gallery focused on themes around plant migration, kinship, identity politics, urban landscapes, psychogeography and living in diaspora.’

Showing one of her other curatorial interests, the combination of food and art, she recently co-curated a social food and art project titled “I Have Eaten It”. This project was a 4-week kitchen takeover at Refettorio Felix, a charity based in West London providing creative experiences around food for vulnerable people. Huma invited Northern Irish Artist Laura Wilson to co-curate and realise the second edition of Edible Goods: an annual programme that examines food as a medium in contemporary art.

One of her other curatorial interests lies in creating immersive experiences and a broader dialogue in collaboration with multidisciplinary practitioners, such as chefs, writers and other creatives. Explaining what prompted her in that direction, she shares ‘After reading post-colonial and aesthetical theory in university and having had crits with other like-minded curators, artists and designers, I realised I was more drawn to pushing the boundaries of what art or exhibition making can be. I knew I wouldn’t be able to work full-time at a gallery or institution. Through different collaborations and co-organising events, I ended up collaborating not only with artists but also thinkers, chefs, writers and academicians. No matter what I work on, opening a dialogue, having conversations and knowledge-exchange are things that are important to me.’

Unsurprisingly, when asked what’s next, Huma mentions she is working on different exciting projects. She has invited Pauline Batista as her next Writing Space resident as a part of Open Space’s writing commissions, which you can read here.

She’s also curating for a friend who owns a creative design studio titled Studio Sahil as a part of the London Design Festival between 18-25 September 2022. The exhibition Coastal Myths by Studio Sahil curated by Open Space will explore the day-to-day objects consisting predominantly of glass that one encounters through stories, myths and connections relating to the island. ‘The word “sahil” from Studio Sahil is directly translated from Turkish to coast or shore,’ she explains, ‘which is a key reference to the exhibition. Islands have always held a significant place in the popular imagination and mythology, with everything from The Odyssey, Shakespeare’s The Tempest and Treasure Island to Elif Safak’s most recent fiction The Island of Missing Trees, all contributing to the idea that these sea-bound lands have more to their stories. By experimenting with materiality, tactility and texture, the studio creates beautiful, timeless objects that explore different narratives around belonging, place and cultural heritage.’

And there are some other collaborative freelance projects that she can’t just announce yet. ‘I am always trying to research more, read more and stay curious when I have fewer things on.’