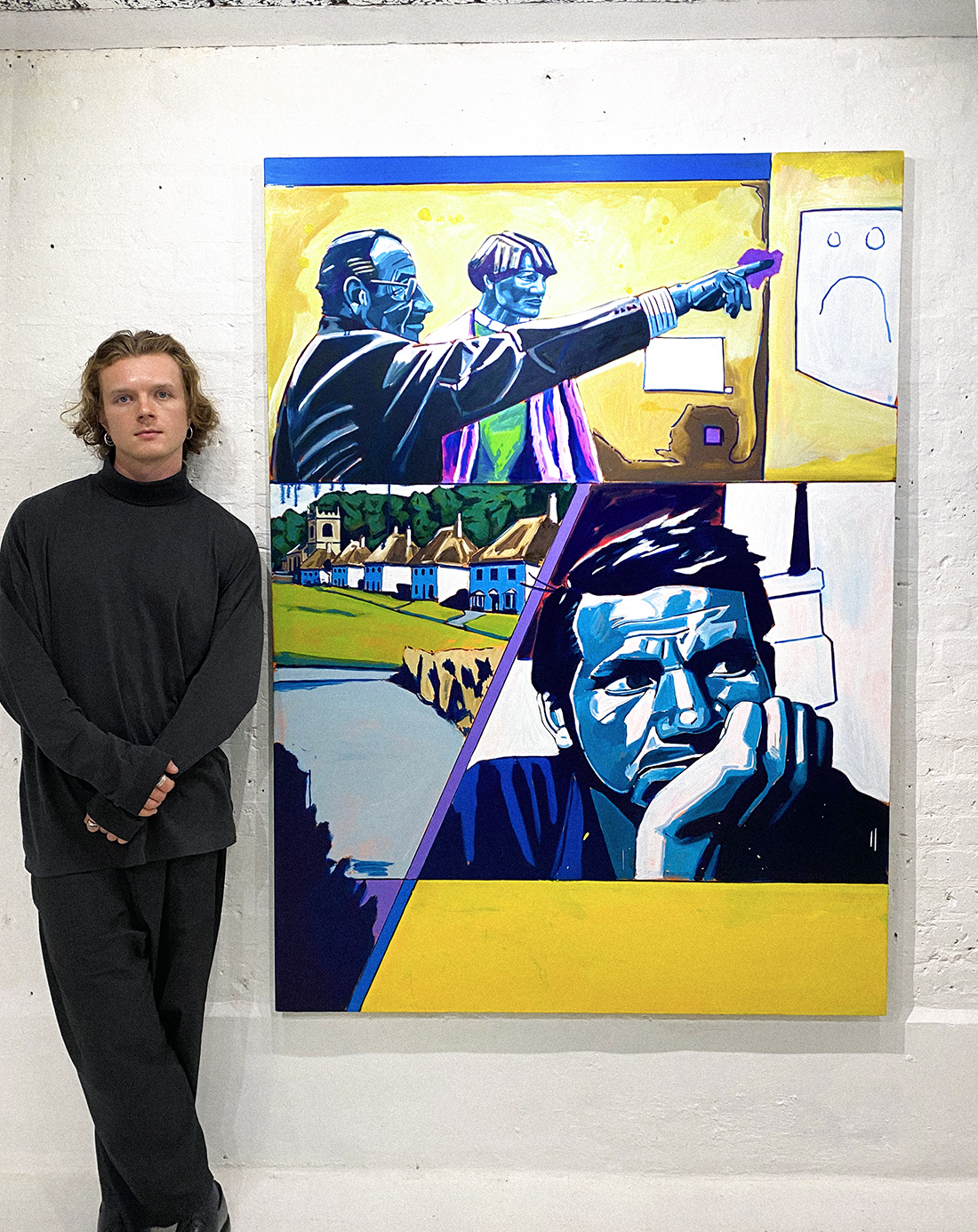 Packed with references to growing up in the Northern city Lancaster with sensible rawness and intimacy, Louis Bennett’s paintings in Tears Like Northern Rain tell personal stories while reflecting upon British histories.

On view at Kristin Hjellegjerde Gallery’s new, expanded “Speak Easy” space at London Bridge, is his latest series of paintings, all created over the summer. Louis' very distinctive artistic language, restrainedly colourful in heavy blues, yellows and purples, is deeply rooted in a European figurative painting tradition, all the while feeling very current. A lot is going on. Each painting tells its own story taken from different kinds of materials, such as old magazines and books, which he selects because of their historical or personal relevance. The canvases, many of them life-sized, are split up in different scenes, where subjects are dealing with different kinds of emotions.

In Marina, for example, there is tenderness. In one part, a chef gently pouring milk for a customer is depicted, which transitions to a boat floating by while underneath, a couple is in a caring embrace. Forgiveness, boredom, comfort, contentment, visitors can read into seeing different emotions passing by—emotions transcending time and place. For the artist, this method of splitting the canvas in different situations is about, ‘its capacity to expand the imaginative scope of painting and transform the meaning of an image through the process of juxtaposition’.

where’s the frame talked to the artist during the opening of the exhibition and where he explained his practice, the different kinds of inspiration he draws from, and how the lockdown measures actually positively influenced his work,

Very few artists can say they’ve had a solo show right after graduating, let alone during their MFA. how did this show come about?

I was part of the group show here, the graduate SLADE showcase, which my friend Victoria organised, and I think the Gallery was interested in the work and decided to go ahead and give me a small solo show.

Could you describe what you’re trying to do with your art in the most simple way?

There is a lot going on. My work is underpinned by an interest in British history and British politics and trying to convey the experience of growing up where I did - a post-industrial northern city - kind of struggling with austerity and nationalism. So that’s the world I’m working in. But recently, I almost put politics to the side a little bit, trusting it will still be there and the work has become about my personal narrative within that framework, what my experiences have to say. A lot of the landscapes may represent home to me. A lot of the work is about homesickness in some way. And the ships relate a personal experience and relate to ideas of capitalism and wealth disparity. There is something political and there is something personal there.

Could you explain the poetic title of the show Tears Like Northern Rain?

I write poetry and I write songs and I think about lyrics and lines of poems all the time. Things come to me in one line ideas and that was one of those. Very intuitive also kind of reflecting a personal heartbreak. But yeah, it was an intuitive arrival that kind of seemed to tie it all together; the heartbreak, the homesickness. It means a lot to me to situate my practice as northern, and I see myself as having more in common with contemporary northern writers like Jenn Ashworth and Ben Myers than I do with many painters. There’s a systemic lack of support for northern creatives, and they’re so often pigeon-holed. I feel I’m on a bit of a mission to counter that.

You draw from, amongst others, cinema, artistic movements, pop culture - could you mention specific ones?

A lot of the work in this show has a relationship to certain songs. So there is a piece that is called Maggie May, for example, which has a relationship to a Rod Steward song with the same name. I mean, I pick and choose stuff from anywhere. There is a lot of Italian horror influence in the colour choices, a comic book influence bubbling in the back. I kind of see myself as within British pop art, so artists like Peter Blake, Tom Phillips and Pauline Boty are almost like the foundation of what I do. I’m also super influenced by the Leipzig School of painters and by a lot of contemporary German painting. I feel very European, often my work feels more European than British even, there is definitely some American influence, like the old school pop dudes like Rosenquist and Jasper Johns. I also want to mention Lubaina Himid, because she gave a painterly voice to the history of my home town, and I’ve never heard anyone speak as beautifully about painting as her.

Perhaps a tricky one, but your artistic style is very distinctive. How did you arrive there?

Years of trying different things I guess. Stealing from other people. Stealing from German painters. Stealing from Peter Blake. I feel like I’ve been making similar works since I was 11. I’ve always loved British pop cultural imagery, like pub signs or Beatles records. All sorts of 80s pop videos. Over the years these things consolidated. Finding a way of using paint that I really love, in the past year or so, has tied these influences together. Both of my dad’s parents, who are heavily referenced in this show, were art teachers. The beginning of being an artist for me was under their wing and learning through them. How to mix paint, their influence is massive in everything I do. I did start very young. From 12, 13 I was doing stuff that has relation to this show.

It’s very impressive that you’ve made all these paintings in 2020. How did the outbreak impact your practice?

Actually, all of these works in the show were made in about five weeks. As for a lot of artists, the pandemic gave me time to reflect and maybe realised that the work I’ve been making at Slade wasn’t true to me and wasn’t what I wanted to do. So, it gave me time to almost go back to my roots and find a way of working I was really happy with. I stayed in London and in my old place I had a studio and was making work there. But all of this work was made in a really short space of time in a new studio. The main influence the pandemic had on me was that it signaled the arrival of a personal crisis, and all of my resulting anxieties kind of crystallized into this body of work.