in conversation with: Vivien Zhang 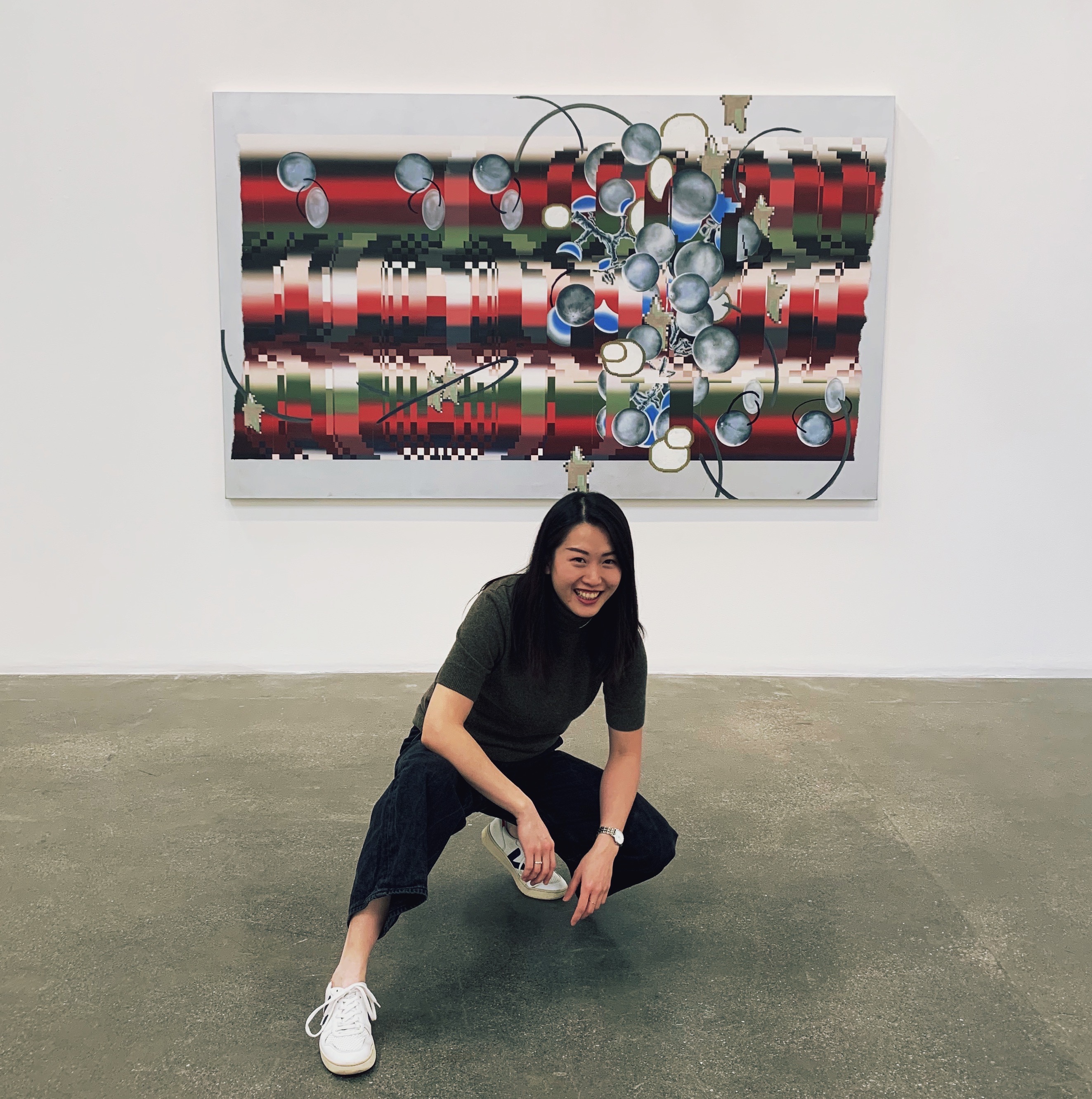 Vivien Zhang, who was included in the ‘it’ list of Forbes 30 under 30 in 2017, is a third-culture whizz who grew up in China, Thailand and Kenya, countries that she holds dearly and are used as sources of inspiration that is deeply imbued in her work. Repetition and motifs are part of her assemblage. Vivien received her BA from the prestigious Slade School of Fine Art and her MA from the Royal College of Art. This interview was done through Zoom, with Gianina, a co-founder of where’s the frame?, and Vivien Zhang in her studio in East London.

GI: Can you give a background to your story?

VZ: My most recent work is very much influenced by this idea of being a third culture citizen; me being Chinese but growing up in Nairobi and Bangkok [and] then making the move to the UK. I’m in this INBETWEEN space that I personally and professionally occupy. People often ask, are you a Chinese artist or a British artist? And I always say, I hope that I can say both. But now that I’m represented by a Chinese gallery, I’m returning to China a bit more with my work. And the other thing – I guess because our generation grew [up] with technology,– is my interest in information technology and how digital platforms have influenced our perception and our ways of reading/understanding information – against painting which is a more conventional medium.

GI: You grew up in Nairobi, Beijing and Bangkok – how did these life experiences affect you? Do you consider yourself as a third culture kid?

VZ: Yeah, definitely. One of the reasons why I’m looking at the digital is because it is a new culture and territory that all of us from different places can occupy in a democratic manner and [it is] slightly more transparent. At the same time, I live between spaces and growing up I was bombarded with new imagery from different places and they all have their own significance. As an artist, I definitely question the use of imagery from cultures that are not part of my origin. It’s a question of adaptation and belonging. You know, my most formative years were in Thailand and I have a really strong connection with the culture; some of my closest friends are from Thailand. But, does it give [me] legitimacy to employ motifs from Thai culture? Just because I lived there, do I have authority and a claim to that? These are definitely a series of questions that always pop up whenever I select imagery from places that I personally encountered but am not native to.

GI: Yeah of course, I mean we’re seeing how the world has been ‘cancelled’ – representation starts to matter, and cultural appropriation is always asked [about]. So maybe you as an artist always struggle with the question, 'do I employ this imagery for myself or for that culture in particular?' Then it made me think of the question, what’s your fondest memories or your favourite food from Kenya and Thailand?

VZ: I love your questions! For me the most memorable from Kenya was the introductory banquet I went to with my mum. I think it was when we first arrived in Nairobi – kind of to introduce us to the culture. It was a Kenyan barbecue of all sorts of wild animals – gazelles, zebras, crocodiles. That was [quite] something.

GI: What about Thailand?

VZ: that would be the street food! So, the international school that I attended was located in downtown Bangkok. The food choices from street vendors were infinite, and the street themselves were a massive mishmash of food and of course sex workers, ha ha!

GI: Then after that, what made you choose to study at Slade and RCA?

VZ: Various reasons. Well, I’m stereotyping, but Asian kids are burdened with lots of expectations from their parents. And during HS [high school], I excelled in other subjects as well, but art was just the subject that I dedicated the most time to. Finishing up a project [at] 2am was normal and fun, at least for me. Then I came to the UK, and my stepdad is British so it’s easier I guess to attend schools in the UK since I have family here. At the Slade they also allowed us to branch out to take subjects other than art, since Slade is part of UCL. I chose Urban Planning. And so I met a lot more people, people who combined art with chemistry, art with archeology, you name it. I thought it was very important to complement my art studies with other disciplines, because art is not insular – it always marries other fields like science, history and technology.

GI: What made you choose RCA then?

VZ: Actually, it’s because my choices were narrowed. I was thinking of the RA, RCA or Slade. But in that year, the RA was not accepting international students, so I couldn’t even apply. And I didn’t want to go to Slade since I’d already spent 4 years there [even though] the Slade tutors were amazing! RCA is the bigger art school that has other disciplines like product design and ceramics – it’s a very valuable aspect for me. And of course, being an artist, you have to have a network. Continuing my education in London just made sense.

GI: Can you please describe your artwork as if you were talking to someone who can’t see?

VZ: Interesting. I would say, my work involves a lot of repetition and it’s a place where motifs from different contexts come in and collide with each other in order to create a “new landscape”. I often grab and use motifs and objects I come across that might have a personal significance to me or they are related to each other, somehow. So, my painting is the place where these motifs and objects meet, immersed in a colourful palette. The repetitive elements of my work also explore this idea of surprise, because repetition projects a sense of anticipation and expectation. So, if something is repeated, sameness is assumed but that’s not true. Nothing repeated is the same because each object, each brush-mark occupies a different temporal space. And after I build a field of repetition in my work, I always interrupt it with yet another motif or element.

GI: Wow! So, then is it fair to say that the most ‘you’ aspect of your work is the repetition, patterns, and the interruption with the motifs?

VZ: I think repetition is a major aspect, but I make a point of not saying “pattern” because patterns suggest something that can be infinitely repeated, while what I want to explore is painting in a contained space. It can be hard to [explain] my practice in one go, because I don’t make serial works, like different colour versions of the same thing. For example right now for the next show, I’m looking at map projection from the last century which comes in different shapes and they depict land masses and countries' sizes more fairly than our current Mercator map. This is the overriding rhetoric of my next show. But if you look at my work visually, you can clearly tell other things may play an equally important [...] role in my work.

GI: Ha ha, it’s very substantial when you describe your work! Shall we move on to the next fun question? If you could only pick one song that you could only listen to for the rest of your life, what would it be?

VZ: As of today, my answer would be Waking Up Down by Yaeji. She’s a Korean American electronic music artist based in Brooklyn. Her tracks are really quirky and fun.

GI: Next question: what’s the weirdest thing that you've ever encountered on the streets of London?

VZ: There are so many weird things! Ok, give me a minute and then we can come back to that.

GI: During these quarantine months, did you discover a new hobby? Or come up with something creative to solve something?

VZ: I have a short attention span; I tried a bit of cooking and I tried taking care of some plants, but I always over-love them and a few have died. But yeah, I’m cooking lots [and] listening to a lot of podcasts now.

GI: So, you mentioned you’re going to have a show in Shanghai. When is it going to take place?

VZ: Yeah, it’ll be in Shanghai. So, it is scheduled for November, but I can’t say anything more at the moment, hopefully over the next few months we’ll have more details about that.

VZ: I don’t know if I can actually go to the show myself though. If I do then I might have to go into quarantine for 4 weeks in total, back and forth. That would be too much. It’ll be such a shame if I can’t see the show physically.

GI: Is it a solo show or a group show?

GI: Then, our final question. What’s the weirdest thing [you've encountered in London]?

VZ: I’m thinking about how during this health crisis everything is kind of bubbling up. With the anti-Asian sentiments, BLM and all… So the weirdest and funniest thing was a couple of years ago I was out on the weekend with my friends, we were just walking and these two drunk hipsters saw us, and one of them wanted to say something racist but he couldn't remember the words, maybe nihao or konichiwa – you know these typical racist slurs. He was so incredibly wasted he couldn’t remember. So, he stood there gathering his thoughts, [and] then he just blurted out “EGG FRIED RICE!!” That was weird but hilarious. He just had to have an Asian reference, but he couldn’t remember, so that’s funny!