in conversation with: Tommy Camerno 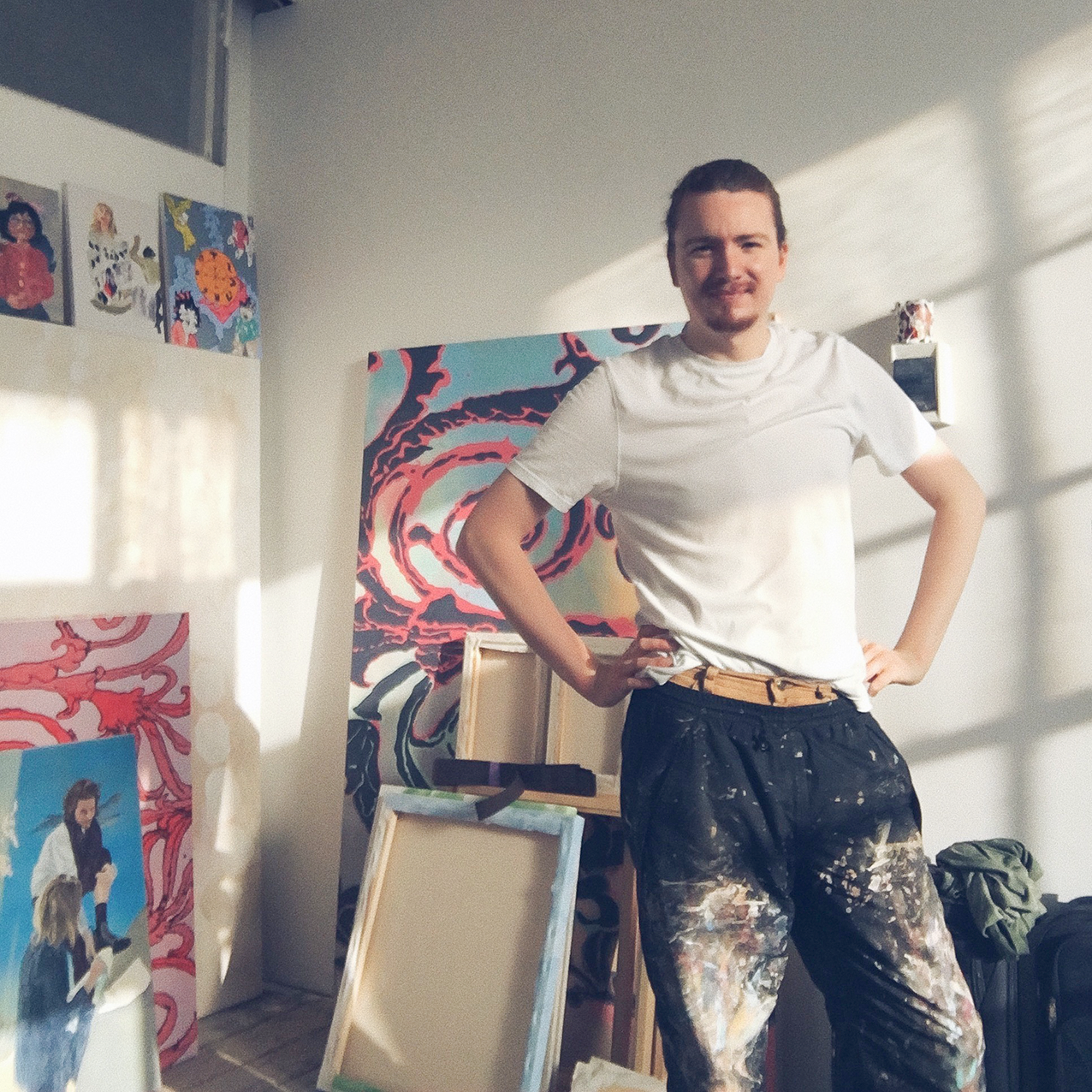 London based painter Tommy Camerno likes his works placed in between structures and walls. In this way, he sees it as a dual choreography, a matter of posing, between the viewer and the painting itself, but also with the room it's set in. Drawn to grey, pale and sweet - almost edible - tones, Tommy tries to find his own colours based on sky colours that create a peaceful and soothing atmosphere. In this conversation with edition, we talk about his practice, the ongoing struggles of art students in this pandemic, and his wide range of art historical influences.

Can you describe your works as if you were talking to someone who can’t see them?

I think the works are complete when they are installed within an exhibition or become part of someone's collection. How the paintings sit with the other objects and the surrounding context completes the intention of the work.

For example, a recent exhibition I did with The Columbia Hotel in London titled 'The Edge' explored this idea. Two paintings were installed at a conventional height on the wall alongside two sculptures that completed a complex spatial logic. One painting depicts a chandelier and one painting a blue sky strewn with clouds. The edge of the cloud painting was covered with mirror tiles. These mirror tiles were then repeated in the sculpture filling an antique jardiniere a couple of meters in front of the painting. The works then evolve back and forth between object and picture like animals evolving from sea to land and back again. From pictorial imaginary space to lived embodied space.

What kind of reaction would you like to get when a viewer first sees your artwork? What do you strive to communicate to others through your art?

My work deals with spatial orientations and the relationship between architectural space, objects and desire. How objects pose like people, how these people pose in front of objects and then how they pose in front of each other, becomes a fascinating choreography. Therefore the works need to be to some extent emptied out of too much internal meaning.

I think of my works as existing alongside other objects and acting more slowly. It’s possible that the work could have a more meaningful communication with the room it’s in than with a viewer.

Could you select one of your paintings and tell us a little bit about it?

Cristal 03 is the most recent painting from the series looking at chandeliers.

The title comes from the name of Cristal Connors from Paul Verhoeven's film Showgirls, who took her name from the champagne. Showgirls is a camp classic and since I found a chandelier on the side of the road and turned it into the sculpture 'Rise Fall Rise' I have been interested in the potential for these objects to be thought of in the same way. They are elegant, complicated, glamorous, glowing, multifaceted, camp and classic; somehow full of aesthetic absurdity and intense desirability.

In Cristal 03 the chandelier is set against a blue summer sky. Its electric lamp glows bright through a crack in the swinging crystals like an oval sun. I enjoy simple but unexpected combinations and transformations.

You studied in London and Berlin and currently at RCA – can you tell us about how different art schools have influenced your practice? And how your work has evolved throughout the years?

At the RCA and other art schools in the UK students are now expected to pay for external studio space on top of fees and material costs due to the pandemic. It is confusing and concerning that students are paying for a physical education they are not receiving.

I think the studio aspect of arts education is such an important part and cannot be substituted. Having a studio lets art students expand their thinking to a different scale. Art school studios also foster collaboration and peer-to-peer learning.

As you mention I've been through a lot of arts education, it’s the path I’ve taken but I don’t think it’s the only one.

I recently read a biography of Francis Bacon and I wrote my dissertation at RCA on my friend David Lindert who is a fantastic artist. Both these artists are what art historians describe as autodidacts meaning they were self taught and never went to art school.

'I have known several writers and painters who drank their talent away, describing the work they were going to do with such eloquence that they convinced themselves they had done it. Their daydreams became a substitute for the work itself.' - Daniel Farson

This is both the danger and the use of art school. It can bring the work closer to the ideas or it can spin the daydreams out into ever more grand justifications for work that starts to become intangible. For me being in art school is a way to prolong the pursuit of this uncertainty. There's something productive in the doubt.

Do you have any rituals or routines before you start working? 10 cups of coffee? 10 cups of tea?

It's important to put in the work, as I mentioned above there can be a lot of daydreaming. Making paintings is like polishing diamonds, you can end up sat there distracted by all the lovely sparkles and forget what you're trying to finish. If I'm enjoying looking at the painting, I'm procrastinating in a way, but it also lets me know when I've done something good.

When I need to start working I need coffee, something good to listen to and a plan of action. Also it's essential to turn off social media. I like the idea that painting could have a similar transcendent feeling to dancing for hours in a club, repetitive, exhausting, euphoric.

Can you tell a little about your colour palette? Why do you choose to employ more pastel colours in your work? What does it signify to you?

I think it's really important to make careful colour choices. Not only because they signify meaning but because it shows a care to the object you're creating and how it sits in the world. I find it disappointing when people don't mix their own colors or use every color all together without any thought.

I don't see colour as signifying something directly. I often choose colours that I think will be peaceful, soothing, lovely, magical and sweet. Dan Rees made an artwork that shows a cake with icing that says 'Keep your art soft and sweet you might have to eat it' and I guess I took that to heart in my work, at least with the colours.

You’re pursuing a masters in painting, but on your ig, there are some pictures of your installation work. Is this a medium you would like to explore more?

I'm interested in painting as it relates to art history and the history of human civilization. Recently I've been thinking a lot about weaving and other even older forms of art making than painting. For me installation is not a new exploration. I've been doing installation works basically as long as painting, but now I think of installation as being specific to exhibitions.

The installation acts as a grammar structure and the painting is like the noun in the sentence. I don't want to just let the conventions of the gallery dictate the grammar of my work.

It's interesting to think of painting as an object in space, especially with our current screen dominated culture. Simply hanging a painting on a wall can do this, but I like to emphasize this object agency even more by anchoring it and counter balancing it with other objects.

I learned to cycle when I was 21 to impress someone I was in love with. It didn't solve the heartbreak but since then I love cycling. I'm also on a long journey to learn how to whistle, so far I can do one very high pitched note. I try to bring this attitude to my art making. Learning and experimenting with new challenges while accepting how slow and unresolving the process can be.

Which artist(s) has been your biggest influence?

I would say Andy Hope 1930 and Karen Kilimnik. Andy Hope 1930 had a show at Hauser and Wirth when I was at Chelsea that really changed my thinking. I discovered Karen Kilimnik through Sprüth Magers Gallery and found that she also worked with installations and scattered objects around her paintings. Something about this spatial and object orientation of painting through installation is what excites me.

Some of the artists who have influenced me most are very obscure, these artists and specific works are closely guarded secret treasures.

I'm thinking a lot about Edward Hopper at the moment.

What’s next for you this year? Any projects you’ve been working on you want to share?

I think some really exciting things will come out of our group at Cell Studios. I am starting a series of Instagram live interviews with the other artists in the studio and hoping this will build towards a group show in the near future.

Over the course of quarantine I participated in a sort of discussion group with other artists mostly based in Berlin, hopefully there will be an exhibition relating to that as well coming soon. I'm also working towards a couple of solo exhibitions to show the Genre Painting series and the Curlicue series.

Finally for those who follow me on Instagram, I have a new ongoing series titled Ancient Sleeper. Inspired by Carl Jung’s ideas of the collective unconscious the series was initiated with mood boards posted to my stories. I then asked my followers to pick their favorite mood boards for me to make new works from. As my work relates to architectural space and desire it has been interesting to question the architecture of the social media platform and represent the desires of my followers rather than my own.