in conversation with: Sophie Vallance Cantor 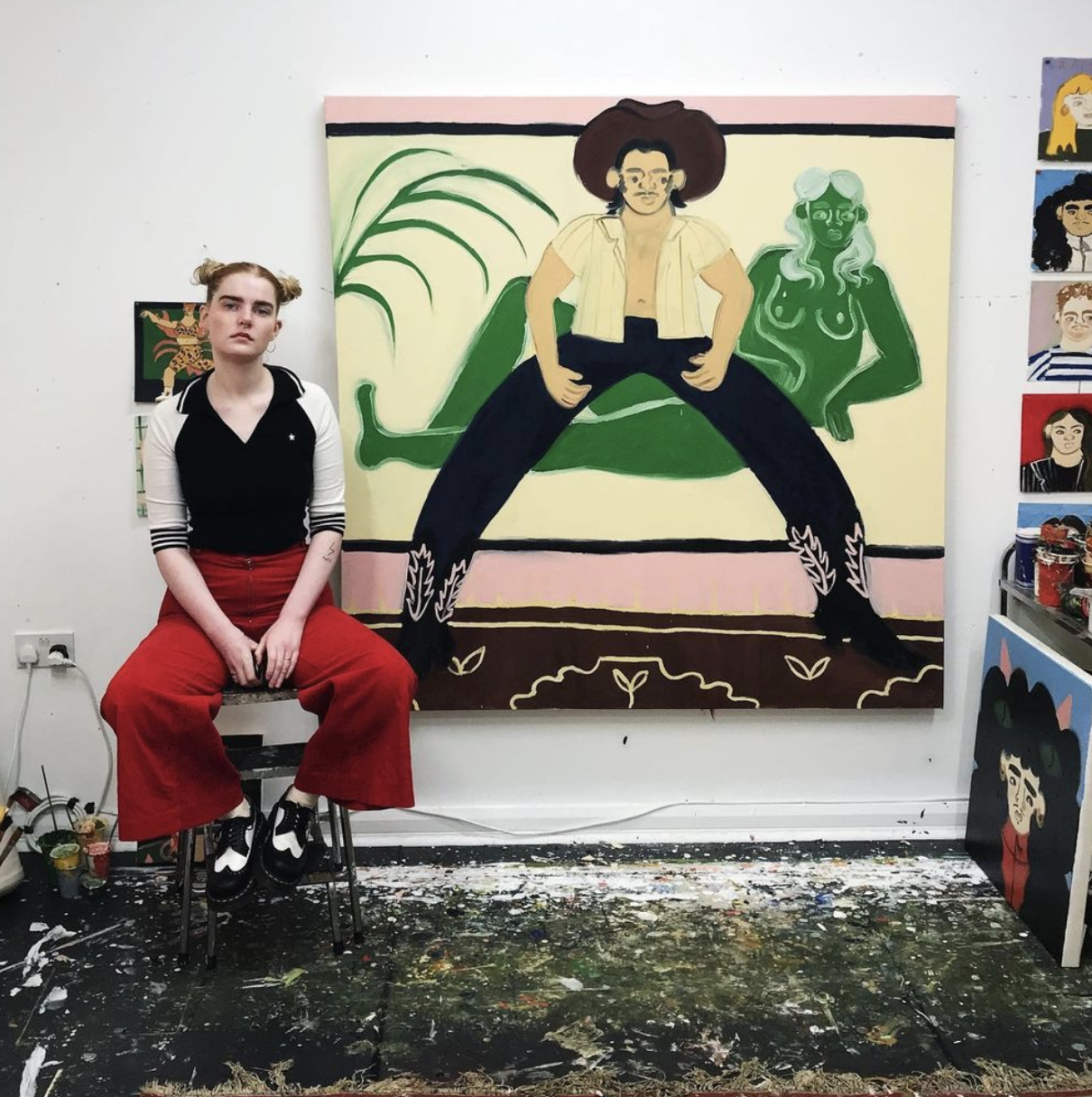 Berlin/ Glasgow based artist Sophie, eloquently depicts her moments of reflection and rest - especially her own response to the isolation that the COVID pandemic brings. It made her realise what is important, which acts as a fuel in her works. She often used animals as a metaphor, especially cats for telling stories that have certain meanings that she observed or even actually happened. The cats are the fantasy version of those moments in Sophie's life. In this conversation with Sophie, we discuss how she felt during the pandemic, how monumental it is for her and her husband, Douglas Cantor with their move to Berlin, and their upcoming show at NBB Gallery Berlin this July!

Can you tell us how your style evolved after you graduated from Camberwell in 2015 until now?

I actually didn’t graduate from Camberwell! I completed second year and ended up leaving due to a personal situation - my husband is from Colombia and after his student visa ran out we didn’t qualify financially for the spouse visa so, instead, we moved to Berlin to be able to stay together- which incidentally was incredibly influential to my practice as an artist and what I was making. At university I definitely hadn’t found my own voice yet, and the work I was making was heavily influenced by other students/trends/what I thought tutors wanted to see, but when I moved to Berlin I felt so removed from all of that I began to ask myself what do I actually want to make? And I consider it to be the start of my practice as it stands today. My practice is ever evolving, and I’m sure it will continue to change and grow as time goes on.

Did your studio practice change during the pandemic? How do you as an artist adjust with the situation?

Funnily enough I think this answer is sort of linked to my answer to the first question. In some ways the formal elements of my practice didn’t change much, I continued to make paintings on canvas exploring similar things visually, but internally I feel like the pandemic also acted as another catalyst to bring me closer to authenticity in my work, just as moving to Berlin did five years previously. Upheaval and uncertainty can be incredible clarifiers, which cut through the bullshit and remind you what’s important to you. I’m actually incredibly grateful for the amount of time I’ve had to just paint in the past year, and the amount of opportunities that has brought my way.

You referenced a lot of cats in your paintings. Can you tell us more about what the subject means to you?

I first used cats in my work back in 2016 in Berlin, we had finally found an apartment and brought our two cats from London to be with us again. I wanted to paint something honest to me at that moment, so I just went for it. Over time they have grown to become these incredible symbols which sort of morph and change from painting to painting, becoming a language to say things in themselves. I feel like at some point the initial seed of why you first painted something begins to become less and less relevant and it becomes the act of painting itself which propels things forward.

On your website, you indicate that ‘napkins’ are one of the mediums of your choice. Why napkins? Does the fact that it’s pretty hard to draw and fragile play a role?

I first began drawing on napkins and toilet roll in Berlin around 2017. I had no money and was waiting to get paid and they were the only materials I had access to because I would steal them from my work. Instead of feeling like I couldn’t make art because I had no materials, I wanted to use it to my advantage and create my own solution to the problem. For me they were such an

interestingly powerful way to put into visuals how I was feeling at the time, tiny snippets, anecdotes, jokes, despairs, quick to make and with nothing to lose. They definitely informed the content of my paintings, and how they have subsequently moved forward, and when I look through them now I honestly crack up laughing at the boldness of some of them.

Can you tell us a little bit about your recent work ‘New Pyjamas’ and does it have to do with the current lockdown?

As our worlds have shrunk during the pandemic, small things and small moments have begun to feel way more precious, so when I got new pyjamas I wanted to paint them. They felt like this iconic visual symbol of the moment in time, and important to record. Recently in my work I’ve been thinking alot about the intimacy of relationships when you share the same spaces, but also those relationships with people you know well and love, but are far away. Having moved around a fair bit I feel like a lot of the people I love are far away, and the act of painting them is a way to keep knowing them and keeping them close. Something as simple as an item of clothing that you associate with someone can be so intrinsic to a portrayal of them, which is something I want to explore further in more paintings.

Do you have any life soundtrack? Like when a sad song comes in and you pretend that you’re in a music video, kind of song.

‘Hold on Hope’ Guided by Voices

What takes you to Cloud 9?

Do you have a favorite menu for sunday dinner?

I have the ability to forget how to ride a bike.

What are you currently working on? Any projects we should know of and that you can Reveal?

I’m currently making paintings for a duo show at NBB Gallery Berlin, with my husband Douglas in July. We’re so excited to be showing work together and in Berlin, which after a lot of years of struggle, it feels like life coming full circle!