in conversation with: Rafaela de Ascanio 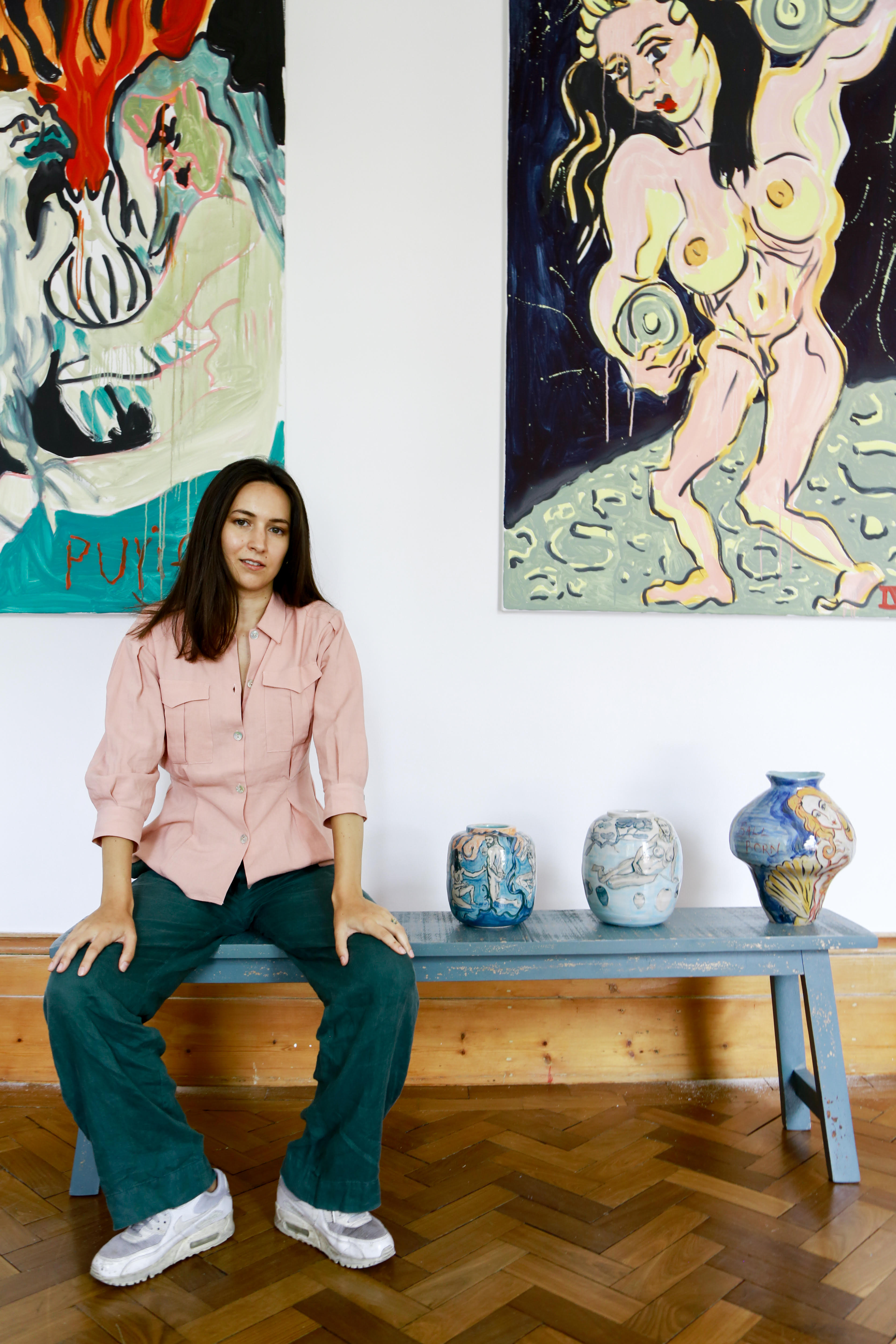 Rafaela de Ascanio, a painter turned ceramist, references a lot of art historical figures from the Renaissance era and even Tarot card illustrations. This may come from her training in art history and museum studies at the Courtauld, alongside her fine art training at Central Saint Martins. Even though the nude/naked female body has been well represented in Rafaela’s work, it is refreshing to see how it is not done through the male gaze and objectification.

You trained at CSM, Courtauld and currently the Turps Banana art school. What have been the highlights of those years? What did each school teach you?  ‍

When I went to CSM it was at the old Back Hill location, which was nothing like the slick Kings Cross buildings you have today.  There were so many people on foundation, which was intimidating, but I luckily came with an old friend, Charlie Casley Hayford, and we were inseparable that year.  We made a tight crew of friends and spent most of our time out dancing - our Freshers week party was at Fabric! I learnt very quickly that I knew nothing and had lived in a bubble. We got this amazing list of names before we started the year, which we had to research and I became obsessed with learning about film directors, fashion designers and artists I had never heard of. At the time my sort of painting wasn’t that well received as it was figurative and the emphasis was still on conceptual work, so I ended up making an installation in a wardrobe filled with objects, paintings and dolls. A few of my friends ended up being singers, like Faris from the Horrors and Dan White from Tribes, and others went into fashion or costume.  Looking back, even though CSM was a bit budget then, there was still this creative excitement and fluidity as people experimented with different mediums.

The Courtauld was an extraordinary time for me, especially Sarah Wilson’s class on Gender and Performance Art in the 20th century. I learnt about so many treasured artists such as Orlan, Marina Abramovich, The Gutai and the Viennese Actionists. Once, I was unprepared for a presentation about Michel Journiac, so I came dressed as him instead, a homage to his cross-dressing works. There was always so much creativity and excitement, and three of my dearest friends were in that class – Fiontan Moran, now a curator at Tate Britain, Cassie Beadle who curates at Cob Gallery, and Gabby Cala Lessina who works at the Arts Council. I loved it so much, I returned to the Courtauld to do an MA in Museum Studies with Martin Caiger Smith.

At Turps Banana I learnt how to be critical about my work and that of my peers. There were two crits right at the end of the year, which helped me to think differently about painting. One with Ansul Krut who encouraged me to see some of my paintings on paper as an important medium rather than just sketches, as they are filled with a natural expressive flow. And my mentor Benjamin Senior gave me invaluable methodical tips, in particular how to strategise a large-scale painting by roughly sketching it in biro again and again on a tiny notepad.

What is the weirdest thing that you ever saw during your time in CSM?

At CSM a heavy, rusted car door was brought into our illustration class by one of my classmates. I had come from a school where illustration looked like Arthur Rackham watercolours, so this was surprising and exciting! Actually, I think at first, I didn’t know how I fitted in at CSM; I was confused by the conceptual work. But now I see it was a time of absorbing a total mind shift, rather than creating interesting work myself.

You were trained as an artist. What made you move to ceramics?

Ceramics was an accidental shift. My husband was throwing pots and I painted some underglaze scenes on them, using the imagery from my oil paintings. And then after that I was avidly building my own organic and sculptural vases and painting them. I see these vases as canvases and in that way, they are still paintings, but the method for the two mediums is completely different.  Oil paintings are quick and expressive; glaze painting is slow, meditative and can be totally unpredictable as you never know exactly how the colours will fire in the kiln.  The two mediums compliment my moods in contrasting methods, but the subject matter remains connected.

I can sense that you use a lot of references to the female figure – it is so empowering to see. What drew you to this?

I've been obsessed with women all my life.  As a young teenager my main interest was powerful women from history.  I'd read books like ’The World’s Wickedest Women’ or stories about femme fatales, phrases I can now see seem anti-feminist, but at the time it is what I could grasp onto to escape the boredom of my androcentric education.  Today I am more interested in the journey of a female body, how we can suffer from physical, emotional and spiritual experiences, and come back with such strength.  The images I make often allude to a transformation; from vulnerability to control and round again. Over the last year that cycle went from a pride in watching my body grow through pregnancy, to the turmoil going through my head dealing with my vulnerable, postnatal body, to recovering physical empowerment.

Who is your favourite female artist?‍

Niki de Saint Phalle is probably my favourite artist.  I can connect with her laying out her vulnerability and anger in her work while expressing it with such vibrancy and lust for life.  For example, her film ‘Daddy’, in which she has her actual mother and a little girl act out her father’s inappropriate sexual appetite towards her, styled with such dark humour, and with overtones of joyful revenge as she smirks over his coffin in the final scene.  Her Nana sculptures and brides, so bright and menacing. And her Tarot Garden in Tuscany, filled with stories of her heartbreak and loneliness and yet completely triumphant as a whole glistening kingdom.

What is the most “you” aspect of your work?‍

Possibly my colour scheme, which seems to come from the tropical clothes I wore as a child in the Canary Islands, themselves a reflection of the nature and fecundity of the island. But I have also noticed how disproportioned my bodies can be, which I unconsciously accentuate depending on the theme of the piece – broad bodybuilder shoulders for power, enlarged bottoms for erotism, trailing locks of hair for connection with nature.

Can you tell us more about your performance at the Tate Modern?

At Tate I read some of Lorca's Sonnets of Dark Love in Spanish.  They are particularly sad as he wrote them to his lover just before he was assassinated during the civil war. It was part of an event put on by the Queer Camper van.  My friend Samuel Douek adapted a camper van so that one wall was a convertible stage for a travelling queer performance space, along with artists Fiontan Moran and Zoe Marden curating the events. They travel around Europe and invite local performers at each stop.  I've joined them on a few occasions: at Peckham Festival I performed the Futurist female Valentine de Saint Point’s Manifesto of Lust (1913), and in Switzerland I lip-synced and danced to a mash up of Blade Runner monologues and music.

What influence does modern culture have on your work?

I think even the modern influences in my work are some contemporary rehash of the past.  For example, the revival of witchcraft and spiritual practices worshipping nature; pagan practices adapted for modern means such as moon rituals, meditation and tarot reading. Queer culture; more Orlandian whimsy than Anal House Meltdown rave! Sci-fi films and literature also make their way into the work.  In my show The Deccan Traps, I spent a lot of time looking at retro book covers and '80s cult classics like Tron and Blade Runner. I was also reading Le Guin, JG Ballad, Philip K Dick… which came on the back of rereading all the Foundation books and a couple of the Dune trilogy. I suppose I am quite nostalgic, and even my view of the present and future is visited through dated fantasies created in the past.

Do you have any exciting projects that you’re working on during this uncertain time?

Yes, I do. Lockdown came at the end of my maternity recovery, so I exploded with creating imagery and exploring the rollercoaster of isolation thoughts the pandemic brought me.  I lost a family member to Covid and created some very special little paintings of peace at the end of that struggle. I am currently working on a ceramic piece for Marcelle Joseph’s upcoming exhibition Monster/Beauty at Lychee One, and I have begun painting on a much larger scale in my garden studio, which is an exciting challenge.

What is your greatest achievement to date?

The first exhibition I put on in a warehouse in Hackney.  I painted large-scale tarot paintings of women which were exhibited in a spotlit temple setting.  I had drawn a magic circle on the floor of the studio which emanated a creative power while I painted the works. There was a mysticism and a buzz about that first show.  I am also quite proud of an elephant sculpture I painted which was exhibited on South Molton Street throughout the summer of 2017. It was a homage to Gaia: women laying down their weapons and kneeling to the power of nature, and the more I remember it the more relevant it feels.  The charity who auctioned it said they couldn’t reveal the buyer but that it lives in a palace in Saudi Arabia now.