in conversation with: Maria Mahfooz 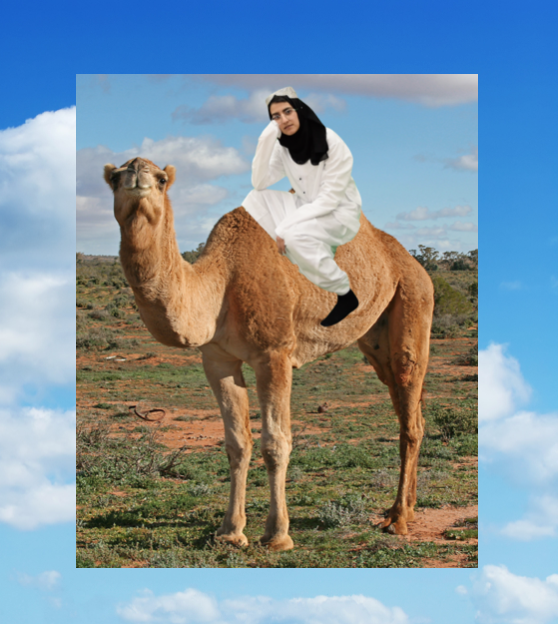 Born and raised in London, CSM grad Maria Mahfooz takes it to a different dimension by using green screens to transport herself into different environments. In doing so, she explores themes of representation, construction of the self, guided by her identity as a visibly brown Muslim woman, and how different spaces can be navigated. It’s about controlling how she presents her body and to construct narratives in a different context. And it’s often funny. There is an easily recognisable sense of having fun with your friends online. Messing around, taking selfies, using animojis, checking out different backgrounds for pictures on your laptop. But it’s always tied into her own identity and related to what’s going on in real-time. In this edition of the where's the frame? in conversation with series, we talk about her time at CSM, different media she would like to explore, Nicki Minaj references, and what exciting projects are coming up for her.

What was the highlight for you during your time in Central Saint Martins?

Honestly the amount of mischief I got up to with my friends was the highlight.

Towards the end when installing the degree show and staying in the library throughout the night was a fever dream and genuinely so bizarre I wouldn’t get that experience anywhere else. The opportunities I got from CSM were amazing but the brutal crits, half asleep lectures, broken printers and waitrose tinnies were what I remember, and when the canteen introduced halal chicken to the menu.

You use a lot of meme-inspired and pop-culture references on your work. Is it fair to say that meme culture plays a central role in your works?

My work is often guided by my sense of self and its relation to pop culture but I wouldn’t necessarily say meme culture plays a central role. Though having said that I use meme and pop culture as a reference to what’s going on in real time, and using that inspiration apply it to the context of my own identity within my practice.

A lot of my instagram features meme references and my content does create a blurry line between what counts as actual work and what’s me just messing around with memes. It’s unclear to navigate but I enjoy the lack of distinction. It’s all a play on digital representation within this nomad space of the online I guess.

Can you tell us more about your recent solo exhibition ‘it’s not easy being green’ 2020? How do other people perceive your humorous and light way in discussing about racial and religious tensions shared by Muslims, especially Muslim women?

oh god that show was a whirlwind! I had plans to show physically in the space and to transform the gallery into a giant green screen, but this was just shy of the first lockdown and we thought it would be best to transfer the show online for the sake of safety.

Leave of Absence gallery were so accommodating during the pandemic we sent out ‘private view kits’ to people to try and get the same sense of a launch as we all joined google hangouts the night of the opening with a complimentary drink, reading list, and some other cute bits.

The title was a play on the Frank Sinatra song that Kermit the frog covered, and I wanted the same humour to parallel the use of green screens in my work and how I use it as a tool to transform spaces and act as a material in symbolising the feeling of otherness as a muslim woman of colour.

Generally the audience to my work are of the straight white kind and I love to use humour with such a difficult juxtaposing topic of racial grief to create a sense of unease. Is it okay to laugh? Is this my way of handling such deeply rooted trauma within myself a coping mechanism ? Other viewers of a similar origin to me often feel a sense of relief and humour, it’s relatable and therefore comforting, they aren’t the only person of colour to be called a dirty paki cunt and so I hope there’s a sense of rallying around together in a shared trauma.

Since your work is connected to the digital realm, are there any other mediums you wish to explore?

I haven’t even begun to fully explore the digital realm, I want to play with blender and a bunch of other fun techy features but my poor poor laptop, nor my brain, can handle something so complex but I’m going to try! I need to clear some space and delete sims 4 from my laptop but I can’t bring myself to part ways with it.

But having been surrounded by general sculptors and painters within my current studio I would love to work on something physical. Recently I’ve been into fabric printing so that’s something I wish to explore, as well as ceramics. I used to often situate my work in physical installations so having made some video work, I like to play with the physical showing of it, like projecting onto sand or whatever, so that’s something I’d like to revisit too.

Since technology, especially internet culture plays a huge role in your works, what is your opinion on contemporary art from our generation? How do you perceive yourself in this boundless online landscape?

Everyone is so so talented, I’m often left so inspired by the works of people I’ve graduated with as well as those currently studying. Instagram has introduced me to so many exciting practices and collectives that I feel a little lost but still enjoying my little space online on this boundless online landscape.

Pages like @hervisions_ and @dateagleart are such a great source of art from our generation, I love the work they both do in curating such a talented bunch. I’d defo recommend checking them both out when it comes to looking at the intersections of art, tech and culture in a digital realm.

What do you think is missing in contemporary culture?

A lot more humour. I often feel a little silly and inferior when my practice is just to be considered as something funny, so I’d love to encounter more works of a similar vibe. Though having said that someone said as soon as you call a work funny, it loses its humour apparently.

But I think more space for humour that also encapsulates real personal grit and commentary. Get me more Nicki Minaj references, I’d love to see some Barbz Culture in gallery walls. I want a show on Nicki’s verse on New Body with the critical theory of Donna Haraway’s cyborg manifesto behind it. Contemporary culture is missing lines of

hey yo, you aint fucked me, you fucked the old body

Ain’t no miles on this here new body

Off with their heads, these bitches in nobodies

I’m really into studytube! It’s a bunch of kids on YouTube that document their days of revising and how studious they are. There’s something about watching Ruby Granger work for 12 hours revising in her day that I find so foreign but so entertaining ? It’s a surreal experience and a world so different to mine that I have no words. Also really into the comments that are currently dragging Unjadedjade at her scam of a university and how she’s traveling during covid. The comments go offfffff and I’m here for entertainment. An undercover studyyoutuber stan.

There’s something so ironic about me, a very unproductive person watching these privileged teens revise all day. A guilty pleasure I must admit.

Do you have any life soundtrack? Like when … comes in ‘you imagine yourself in a mosh pit fighting for your life’, kind of song.

White noise. It reminds me of being unborn x

Na but forreal I’d say listening to the song Do you mind (crazy cousins remix) by Kyla, a sense of nostalgia. I imagine myself listening to music via channel U, youths playing music on their Sony Ericsson’s at the back of the 86 bus and £1 chicken and chips after school. My life soundtrack for when I want to feel nostalgic for East London who still has some pockets of spaces that are somewhat trapped in the noughties. A wholesome school banger that makes me feel young and nostalgic.

What’s the weirdest thing that you ever encounter in the streets of London?

To be honest having been born and raised in London there’s a lot of weird things I’ve encountered that are just the absolute norm now. But there was a quaint moment where I walked past a black cab in Holborn and the two drivers were in the back with a full on chess board playing in the London summer heat. There was something so charming about it. I hope they’re doing well.

What’s next for you this year? Any projects you’ve been working on you want to share?

I’m so bad at keeping track on what’s coming but I have a few projects lined up. I have a radio slot for Montez Press toward the end of Feb where I manifest positivity via an imagined islamic futurism on radio airways so listen out for that.

Also a project with Dateagle for ‘Control the virus’ where I’d be recreating a dating app online where the only users are me.

I have a few more bits keeping me busy but I’m just at my studio at the moment trying to maintain a healthy practice. I appreciate the time and also the opportunity you’ve given me to chat the most absolute shit so thank you to Where’s the frame !