in conversation with: Hannah Kim 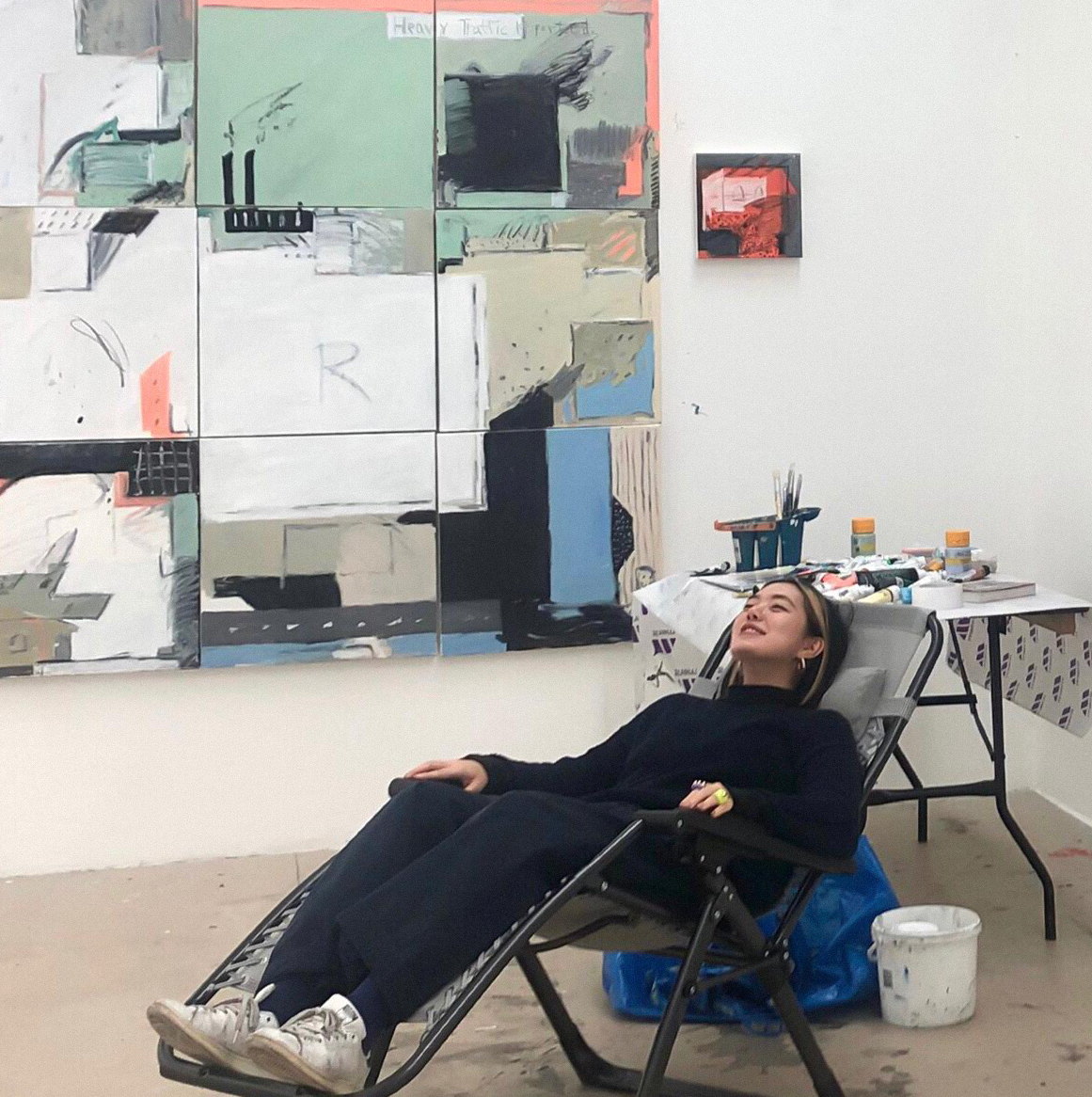 Seoul born, London based artist Hannah Kim creates paintings that are made up of dynamic abstract colour fields. Drawing inspiration from the memories about houses where she has lived before, these paintings are grounded in the desire to remember and recall them. The artist in her second year of the MA Painting program at the Royal College of Art where she continues to explore how our residential areas exist in this digital age. In this conversation with the artist, we discuss how video games have played a role for her practice (SIMCITY anyone?), construction sites, and those privacyless apartments around Tate Modern.

2020 is a weird year and London is in a second nation-wide lockdown. Do you find a way to cope creatively as an artist?
As our school has run the studio in two weeks rotation system since this new term, I had to find another space outside the school and have moved back and forth to these two studios. It’s not that easy but just trying to set up two different modes for my work and make much of it.

Do you have any routine/rituals before you start working? Cigarettes? 10 cups of tea? Or maybe scrolling through Instagram? TikTok?
It might sound a bit funny, but I do enjoy watching gameplay videos on YouTube before starting to work. Or sometimes even playing it with my laptop or Ipad. Mostly construction simulation games like SIMCITY or kind of sandbox games like Minecraft. I barely use specific images or objects as references for my work on those days but watching some moving images that keep being transformed in the gameplay video is inspiring me a lot.

How has your work evolved from your bachelor’s to attending a postgrad degree in RCA?
I have worked at some construction sites around me when I was in BA course and even in my first year in RCA. I was fascinated by the energy coming from the site and am still interested in a phenomenon and process that residential spaces have been destroyed and reconstructed repetitively. But a perspective toward them has been getting more personal and a bit emotional. While my previous works were mostly based on some specific sites and pictures of them, Now I’m more focusing on capturing my own memories of houses I lived in which are quite elusive and blurry and creating images more freely with the memories.

Your recent works combine pastel colours and squares. Can you tell us more about this recent series?
Basically, my works are about houses that I lived before but already vanished and a process to recall them. I’ve got many inspirations from simulation video games that players can build and develop their own cities by themselves like a  SIMCITY especially the classic one. SIMCITY was one of my favourite games when  I was a kid, so it gets me pretty nostalgic. I use symbolic patterns, letters and colours used in the game platform in my painting to create imaginary spaces.  The classic version released in the 1980s is based on 2D isometric graphics, so images in the screen are completely flat and built with loads of square modules. The shape of a minimum unit of construction is square as well. Using separated square canvases or panels allows me to work more actively. While disassembling and putting together those pieces, I can engage in conflicts and interruptions between them. It could be conflicts between my memories or sometimes between imaginary spaces.

As a young artist, what themes and contexts that you want to explore?
I’ve always been interested in our residential areas and ultimately how they have existed in this digital age. The way they exist has been obviously changed and the possibilities of the house are getting expanded. I mean the possibilities of spaces that we can feel like being at home. When a new game series of  Animal Crossing was released a few months ago, it set a record for hardware unit sales. The game enables people who have been locked inside in reality to experience another feeling of home. They do feel a sense of normalcy as the game actions aren’t grounded in fantasy. Think we have always been around a  blurry barrier between the real and virtual space so far. I want to keep exploring how the house could be positioned between these two spaces and their relationships.

This might be a tough question to answer, can you tell us more about your creative process?
I usually get a starting point or inspiration from the memories about houses I  lived before. A desire to remember and recall them to be more exact. This is maybe because my family including me experienced many relocations due to urban development plans and reconstruction when I was young. I’ve never lived in the same house for more than 3 years. What I try to recall about the house is not only how it looked like but all about my feelings, thoughts and even some little happenings like I experienced in my bedroom and they become a thread of narratives. But I’m not able to relive the duration which has vanished. It’s impossible to remember them exactly and they don’t need to be. I just want to create a sort of imaginary and nostalgic space that allows me to recall those houses endlessly. There are always some conflicts or void space between my memories, but this uncertainty makes a process more interesting.

Can you describe your work in less than 15 words?
About the house of memories which has been scattered

Do you have any life soundtrack? Like when a sad song comes in and you pretend that you’re in a music video, kind of song?
Two Thousand and Seventeen by Four Tet

Have you ever encountered anything weird in the streets of London?
Not really but there is a neighbouring apartment with a transparent curtain wall around Tate Modern. It’s on the left side of the terrace of the café at Tate Modern.  Visitors can see residents having tea in the living room or cooking in the kitchen like a peeping tom. And there is a warning sign on the wall at the terrace: Please respect our neighbours’ privacy. It was quite interesting as it seemed like the place in which desires to be seen and to be invisible are coexisting.

What’s your plan after graduating in 2021? Anything you can reveal?
I find it quite hard to plan something as now is such an uncertain time, but maybe I will be trying to find something funny and creative.

where's the frame - ‘in conversation with’ is a weekly series featuring London-based vanguard artists. Stay tuned for more interviews, published every Friday.