in conversation with: Gala Knörr 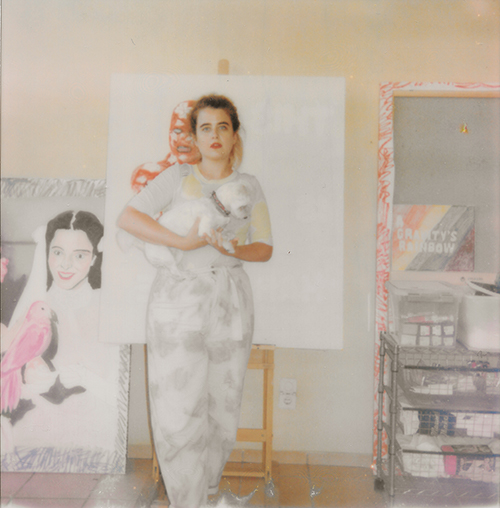 We always say that Gala is a psychic. Her satirical piece on Kanye West at the Oval Room and her work mixing between Boris Johnson and the Spice Girls are two examples from her oeuvre that illustrate the current political climate with a tongue in cheek. Trained at Parsons Paris and Central Saint Martins, she helps us avoid the realities of life by her frivolity-filled works.

‍Since we cannot meet in person and do a studio visit, can you describe your workspace?  Are there any plants? photos of Carol Baskin? Or a weird obsession with Meghan Markle and Prince Harry? Justin Bieber maybe?

Lockdown caught me in Spain visiting my parents after a long couple of months with the Generaciones Prize Exhibition at La Casa Encendida in Madrid, Arco art fair and teaching workshops in schools in the Basque Country. I had been traveling in areas that had worrying numbers of covid19 infections and I was super paranoid to be one of those asymptomatic transmitters of the virus. I was supposed to stay for a couple of weeks before parting for Lisbon to do a residency at Thirdbase Studio, but a state of alarm was declared in Spain, my residency was postponed, and a very strict quarantine was established. It was so nerve wrecking to watch the news, I couldn’t even think of making a single drawing, I didn’t have much to work with either, or art stores were non-essential businesses, so many of the things I needed I couldn’t even buy online. As soon as things deescalated, I was able to commence working, bought myself a lot of supplies, unpacked a box of inks and oils I shipped from my old studio in Paris this Christmas. And decided to set up an outdoor studio at my family’s terrace and decided to stick around for the rest of the summer. At a new pace make new pieces and let this forceful stillness work to my advantage as much as I could. This means I am surrounded by plants, my dog, print outs of memes and Instagram photos, no Carol Baskin but did an ink portrait of Trump’s face in Joe Exotic’s mugshot that I think it’s quite delightful.

You trained at Parsons Paris then Central Saint Martins, can you tell us about your thoughts on these two schools?

My experiences were completely different, also the artistic and historical contexts of Paris and London are so dissimilar, there is no doubt I was gonna be surprised at some point, sometimes negatively other times positively. Studying a 4 year BFA in Paris before the crash of the market in 2008, and the consequent recession was an incredible moment to live through. I was 19 years old when I arrived (the year before I was studying Liberal Arts with a focus on Political Science and Creative Writing at Richmond University in London), I spoke no French at all which was not easy at first, my native tongue came in useful, but in school I felt because Parsons Paris was such a small satellite college of The New School in NYC, alliances and synergies between students and teachers were easier to be woven and I graduated feeling that most of my professors were my friends. I travelled for a bit and then the market crashed, I had no idea what I would be able to do with my degree so I just painted for a year at my parents house and had a show in my hometown. Soon after, I came to Central Saint Martins as an MA Fine Art student at the legendary Soho building in its last year of life. People weren’t too worried about generating connections right away, it was also the last year the program was only a 1 year MA. Everything felt rushed, and was pretty heavy for me emotionally and artistically, often felt a disconnect with my tutor which cost me a big ole F for the first term of the MA haha. It felt like a punch in the gut at first, but I knew we weren’t gonna see eye to eye, it felt very draining, so added vodka to the lemons I was getting, and followed my friends’ band (The Entrance Band) on the UK leg of their tour. I documented their backstage life, made new works from it, turned my F into a Pass, wrote a very impassioned thesis project that was generously graded, left feeling that even though I didn’t feel I was making better work, I actually could contextually and theoretically place what I was doing, and understand it be›er, which to this day I am thankful for. The following years I stayed in London, my CSM gang was strong but everyone gradually went back to their countries so the magic that we achieved collectively slowly disintegrated into different cities.

Can you please describe your artwork as if you were talking to someone who can’t see?

A colourful playhouse where everyone is welcome to laugh, twist and shout. ‍

Is it fair to say that memes inspire you a lot to create a more satirical work?

They do, memes have become incredibly iconic, or more so icon generators. Conceptually they interest me because they are one-use images that we share, sometimes virally spread, their quality isn’t normally terribly high, there can be many versions to one meme, and the users of those are the ones who transfer their affects into them, add new levels of signification, creating a never-ending strata of meaning. Life in the past few years has just almost turned into a sci-fi novel, memes are a creative imaginaria often using satire acting as autonomous forms of resistance, and that resonates with me and my pictorial work.

You received an academic appointment and did your residency at the Centre for Postcolonial studies at Goldsmiths London, can you tell us more about your time there?

My friend Felipe Castelblanco who was the Starr Fellow at the Royal Academy did a project with them, and recommended me. I pitched a project I had in mind since I did my residency at the Guggenheim in NYC, Francisco Carballo (deputy director at the Centre for Postcolonial Studies) and I had a long correspondence online about it, until we officialised our collaboration. The project was kindly supported by the Department of Culture and Language Policy of the Basque Country, the Etxepare Basque Institute and the Cultura Resident Program of the Consorci de Museus de la Comunitat Valenciana. ‘Nessun uomo é un’isola’ was primarily based on my experience working at the British Museum, the rise of grassroots movements, the decolonization of Museums and the series of insecurities that Brexit triggered affecting our domestic, private and public spaces for citizens and non-citzens alike. These insecurities are reformulations of preexisting racial, religious, ethnic and class divisions in the society of the United Kingdom. My project was conceived as a post-Brexit strategy for those affected by policies generated in the last decade, facing an imminent displacement or isolation in their everyday lives. I was inspired by classical objects that were part of the permanent collection of the British Museum, through their reappropriation and resignification in a contemporary narrative, using painting as a means to create a fictional Empire that seeks to protect contemporary narratives solidarity, inclusion and multiculturalism within public and intimate spaces. A workshop to finalise this project was set for this year, but Covid19 happened and was put to a halt.

Do you have any rituals or routine before you start working?

Not really, I mostly just start with my emails and social media, I archive a lot of images that inspire and go through them trying to find a narrative I could create with them and translate into the art medium. I work rather intuitively and lately have been trying to realize the ideas I have that I think might be a bit cuckoo as much as I can, experimenting is a form of growth, learning new things and integrating them into my work in a cohesive manner. It's a huge part of my process.

Do you have any life soundtrack? Like when a sad song comes in and you pretend that you’re in a music video, kind of song.

So many, but I will be concise on this one, the entire Bob Dylan catalogue from the 1960s. Basically because Bob was an avid writer when reflecting the time he lived in, and to me his music never gets old.

You’re from Basque Country, Spain. What do you think of the singer Rosalía who just released a new single with Travis Scott?

Rosalía is the hottest artist in Spain, she started being a little underground and then she exploded into the sky like the star she really is. We call her ‘Diosalia’, a concoction of the Spanish word for God which is ‘Dios’ and her name haha. Her breakout debut album was actually her BFA’s thesis project which tells you how much in charge she is of her creative process, and how intelligently she mixes something so traditional and deeply embedded into Spanish Folklore like flamenco with new sounds and mediums of the 21st Century. Also the fact that she made Travis Scott rap in Spanish is wonderful, that mix of genres, voices and loops is so refreshing. Like many innovators she has some retractors, flamenco purists we could say but the more she works and wows the quieter these people are. ‍

Which artist of the past would you most like to meet?‍

There are three of them, one who sadly passed early this year, the gentle giant John Baldessari, whose work and the way he grew his practice and career has really inspired me. And two of the best living artists both 80 years young, Ed Ruscha whose work is mysteriously poetic and Peter Saul with his LSD-like acidic and colourful pictorial satre.

What are you currently working on? Any projects we should know of and that you can reveal?

During quarantine I started a digital artist residency with Adhesivo Magazine, a Mexican art and culture magazine, 7 artists from around the world were invited to meet weekly via zoom to talk about our practices during the pandemic as a form of support during lockdown. We have also received ‘visits’ from critic Kenny Schachter, Paco Marcial (artist & Jason Rhoades ex-studio manager), collector Ronnie Pirovino and Michael Straus of the Robert Rauschenberg Foundation. It has been a very enriching experience to hear first hand insightful stories of people who work in different sectors of the art world. The residency is ending this month with the presentation of an online exhibition that will be curated by Adhesivo’s editor in chief Edith Vaisberg and Kenny Schachter.

I am directing an online workshop titled ‘The work of art in the era of memetic reproduction’ for Can Felipa Cultural Centre in Barcelona, and expanding my project ‘Tumbleweeds’ which I started at Cité Internationale des Arts as the Juan y Pablo de Otaola Fellow, which explores my fictitious epistolary relationship with author Jack Kerouac through text, performance, video, music and painting. It was supposed to be exhibited in May, but unfortunately pushed to December, in Torre de Aryz Cultural Centre of Basauri, a neighboring city of Bilbao.

‍All photos courtesy of the artist.