in conversation with: Christopher Hartmann 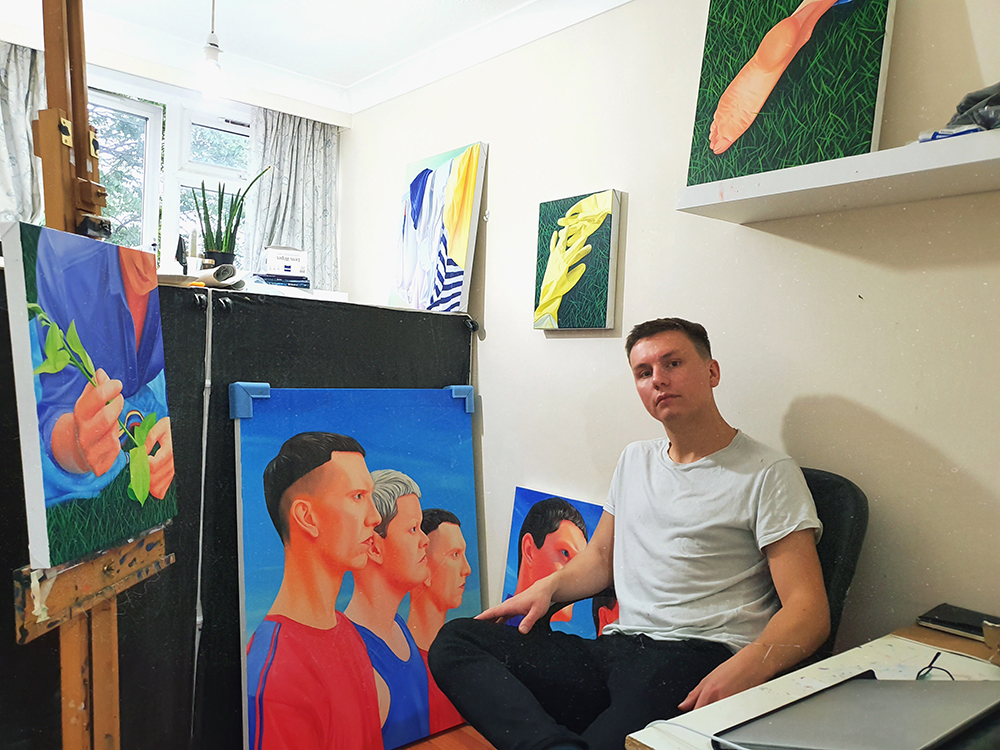 Christopher is a German and Costa Rican artist whose humongous canvas and bright colour palettes captivates audiences. Bounded by contemporary narratives, Christopher’s works explore the atmosphere of isolation, detachment and alienation. Three of his works, including a dyptich, feature in the online White Cube exhibition, ‘Tomorrow: London’.

You grew up in the Southern part of Germany then you moved to Barcelona then the UK for master’s degrees in Goldsmiths and Central Saint Martins. Can you tell us about your experiences in those schools?‍

Central Saint Martins felt like a cold high-pressure environment to me. Even though the school emphasises the students to be independent (which is totally necessary in the arts) it very often felt like an excuse to say nobody cares about you. There was not much support from tutors and the whole school feels too crowded which might explain the low student satisfaction. That being said, what made my time there more enjoyable were my classmates even though we all felt the negative and anxiety provoking atmosphere. I took a lot of inspiration from people there, I liked the open-minded atmosphere.

Goldsmiths is really what you make out of it. You have lots of tutorials and I personally enjoyed them a lot, much more than at CSM. I had to sacrifice quite a lot to be able to do the MFA, so I took it very seriously from the beginning and wanted to work as much as possible to make it worth it. This year in particular has been very frustrating though. We had to deal with five weeks of strikes and then Covid-19 during the same academic year. I think we all feel let down by the institution and didn’t get much out of the education we paid for. I also think that Goldsmiths, like all the other art schools, really have to undergo some changes, it’s 2020...
‍

Can you please describe your work environment?
I like my studio to be clean and organised. I have my painting trolley with my palette and all the tools I need. Other than that, lots of canvases, a desk with my laptop and headphones, minimal.
‍

Do you have any routine/rituals before you start working? 10 cups of coffee? Cigarettes? Or maybe meditation

‍At least one coffee in the morning and after lunch. I don’t smoke, sometimes I enjoy a glass of red or a beer to calm down a bit after a long day. I recently started meditating as things got really stressful. I cannot paint when I’m hungry, so I always have fruits or snacks with me. ‍

Can you please describe your artwork as if you were talking to someone who can’t see?
Tough question, I’ll give it a try: I depict ambiguous relationships between people that feel alienated or detached to each other and their surroundings. I’m interested in depicting the distance between bodies, not just physically but the emotional and psychological gap between people. Especially my most recent paintings explore the atmosphere, the feeling of isolation, detachment and alienation. In many of my works I intend to describe the feeling of unresponded intimacy. A body touching without being touched.
‍

Most of the subjects of your paintings are male. Is this your approach in questioning the idea of masculinity?
During my time at CSM, I made a lot of work challenging traditional notions of masculinity which has definitely influenced my work. I wouldn’t say my work is primarily about masculinity. My work deals with themes such as alienation, detachment or (unresponded) intimacy, themes you wouldn’t traditionally associate with masculinity. I also think it has to do with authenticity, perspective and gaze. I don’t think I can accurately and authentically describe the experiences of someone or a group I don’t belong to. I talk about relationships that are close to my experiences, that feel authentic to me which are mostly non-heteronormative relations.
‍

Other than the use of bright colours and seemingly enhanced in size subject of your work, what do you want to convey to the masses?

Ideally, I would like people to identify with the narratives in my works. All my paintings are bound to contemporary narratives we all have experienced in a way. And that’s probably why I am not so drawn to abstract work as I am interested in narratives. I would like my paintings to be read in a similar way you would read ‘Bluets’ by Maggie Nelson or watch a Michelangelo Antonioni movie. I think people share many similar experiences and I want to reflect and start a conversation about them.

Can you tell us about what we can expect from your work for the White Cube’s ‘Tomorrow: London’ show?‍

White Cube chose three artworks for each artist. My painting ‘Holding on to you’, a small painting I made during the lockdown, depicts a cropped face laying on a bed. By zooming in my intention was to emphasise the intimacy and vulnerability of the depicted figure. Exposed to the viewer, the figure touches a pillow, with the forefinger pointing at the absence of another.

My diptych ‘A touch that is longing, a touch is distant’ shows two figures laying, almost floating on grass, touching each other. Seemingly romantic and tender at first, the facial expressions and body language suggest a certain disconnection and distance between the figures. It’s about rejection and loss, the (physical and psychological) gap between the two.
‍

My painting ‘Standing still, moving on’ depicts three figures inhabiting an eerie non-space gazing apathetically into the distance. By oversaturating the sky and the grass my intention was to make a familiar motif strangely unfamiliar. I could talk ages about this particular work…
‍

Do you have a life motto? What would it be?
‍

I don’t really have a life motto but as a proper Capricorn I do believe in hard work and persistence.

What’s the weirdest thing that you ever encounter in the streets of London?‍

To be honest, I’ve been thinking quite a lot about this question…I don’t really spend much time in the streets of London. I can’t really think of anything particularly weird; I’m probably used to it by now, nothing surprises me anymore.

My main plan is to make new bodies of work for different exhibitions. I’m also doing a residency at the ForesProject at the moment and after that I hopefully find a new studio. I also decided to interrupt my studies at Goldsmiths because of Covid-19 which is why I will make works for the degree show next year too. With the pandemic going on you never know how far ahead you can plan things, so I’ll just see what opportunities arise and stay productive in the meantime.