in conversation with: Allan Gardner 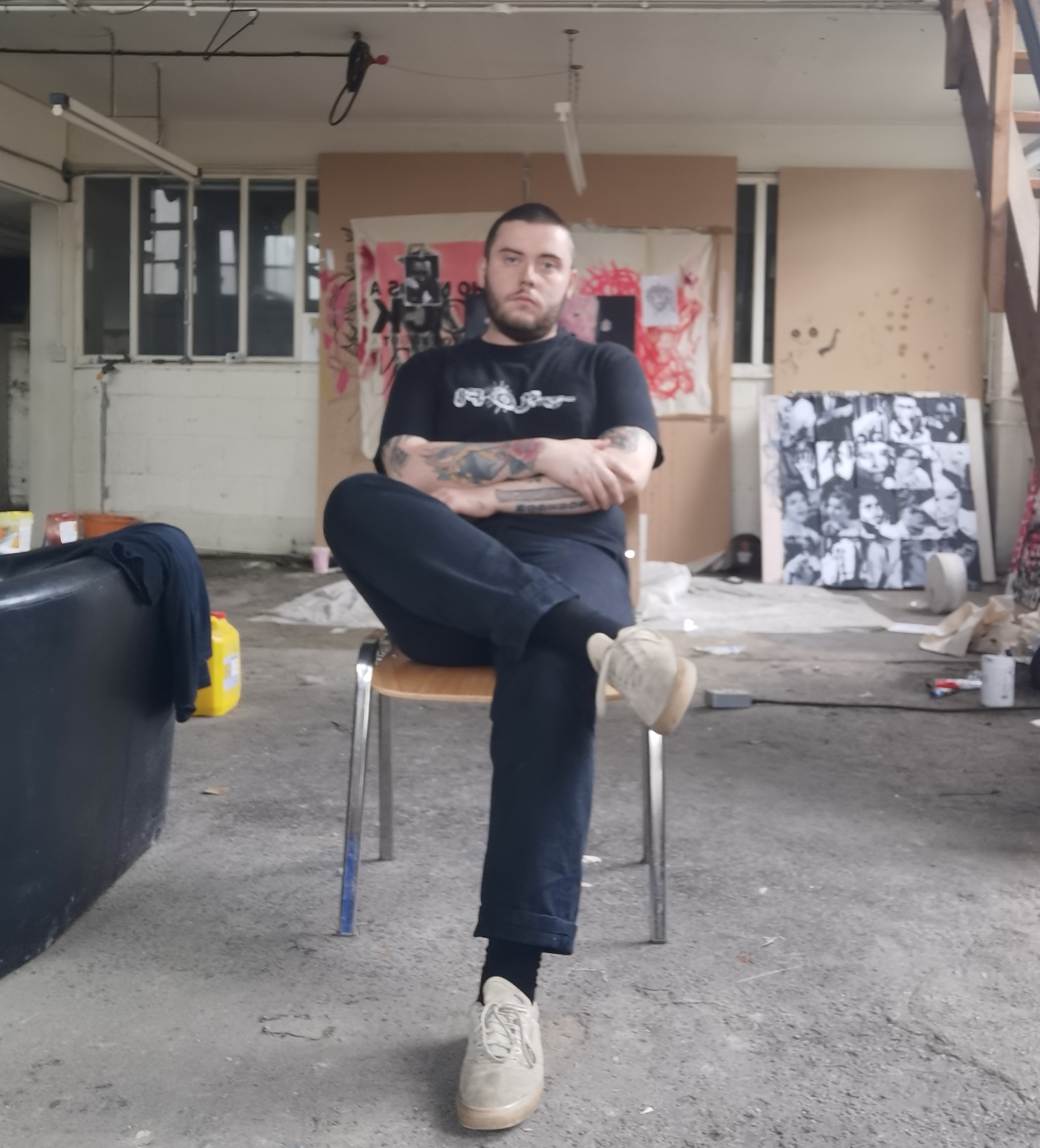 If you were, or still are, an anxious teen, you’ll resonate with the works of Allan Gardner. He questions complex ideas of how fear and anxiety implicates hopelessness and a sense of nihilistic misanthropy, a distrust of one another that separates us from our community, our peers and our sense of self. In this conversation with Allan, we learn about how his favourite cafe in Dalston, pop culture and the symbology of it, and the British artist, Mark Leckey that his work was influenced by.

You were trained at the RCA with the major contemporary art practice – can you elaborate more on the major and if any, a unique aspect about it?

It was pretty loose. There were some great people, staff and students, and some less great people. I’ve talked pretty extensively in previous interviews about my devolving relationship with the RCA over the course of the covid crisis, which was an unmitigated disaster.

The trouble with art schools is that people think they need them, they're afraid to really stand up to them in a way that enacts change. The reason for that is that it's partly true - I needed art school. I didn't know anything about art, when I started my bachelor’s degree I think I'd been to so few art galleries I could count them on one hand. So, for me, it was pretty essential.

With that being said, it can cause problems. It can be a haven for people who want to identify themselves as artists but are really more like bureaucrats, you find them in academia around the world. Locked in an endless state of research paralysis, one-upping their colleagues with knowledge of obscure philosophy and emerging technology.

Those people never make anything, they're locked in a permanent state of stasis, crippled by a fear that they'll make something which isn't a perfect, succinct representation of the piles of books sat on their desks. They miss the point, all artists read and research, it's just holistic. It isn't bureaucratic. Art schools are fertile soil for people with deep pockets masquerading as artists and intellectuals.

Since we cannot meet in person and do a studio visit, can you describe your workspace?

I have two studios in Leeds, West Yorkshire which I share with three other artists (Jack Kennedy, Sam Hutchinson and Edd Carr). One space is for all the computers, printers, audio equipment etc. And the other is for painting and making. It's really good for me, I'm a social person and like to bounce ideas off of people, also the wet/dry split is great for resetting my ADD addled brain. It's helpful to separate stuff in that way.

Do you have any rituals or routines before you start working?

Not really. I don't do routines particularly well. I walk to the studio, which is about three miles, that gives me time to plan my day more effectively. Does that count?

Can you please describe your artwork in 15 words or less?

Good art by a guy from Scotland.

Your work reminds me of a black and white graffiti art – spontaneous and dark but very much necessary. Is graffiti art related to your current work in any way?

I guess it is related in the way that you've described. It's often spontaneous and includes repeating motifs, which develop over time, like a tag.

I don't think I'm influenced by graffiti particularly, but I do really like the social politics of it. I’ve never been much of a tagger but have some friends that are and i really like hearing stories about graffiti beef and writers crossing each other out. I take photos of a lot of the developing beef between people, since where I live is pretty packed with tags. I don't really think about it when making work but it's a cool thing for sure.

Yep, and Parker Ito’s America Online Made Me Hardcore. It's worth noting that Parker having a play on the name probably gave me the confidence to do the same thing.

If Leckey was trying to represent an evolving subculture in the UK, especially working-class subculture, I kind of went the other way. That piece is satirical and sardonic, trying to address the omnipresence of fear that I feel like we live under. Rather than documenting something, it's about the impossibility of documenting anything anymore. The death of the expert, the intense chaos and the lack of resolution. If the 90s was the beginning of looking back at our cultural evolution, the 2020s is more like witnessing a cultural devolution in which capitalism permeates every part of us. We cease to have an authentic self and become hyper individualised in our search for one.

Is it fair to say that most of your works discuss teenage angst and fear? Especially the fear to meet society’s expectations?

Maybe not teen angst. Fear, definitely. Teen something? For sure. The thing that I'm really interested in is pop culture and the symbology of it, the way we choose to represent ourselves. When you're a teenager, that seems like the most important thing in the world - whatever you are, however you feel in that moment - it's forever.

Now, everything is precarious. Uncertain. I guess it’s partly nostalgia and partly escapism, longing for the purity that still feels close to me but with an awareness that it's completely beyond reach.

Going forward, I really want to try to bring the idea of pure love into my work. The sort of love that felt like it was the only thing in the world and could change everything. It's something that happens to everyone, it's an empathy line that we can reach one another through.

What’s your favourite thing to do in London? And why?

I’m a big fan of drinking beers. I also always try to eat at cafe Andu in Dalston, that spot is amazing and everyone should go.

Since I moved back up North, I have a lot more fun in London but mostly just because I'll spend a few days a month running around seeing shows and friends. There's a lot of positives about the city but for me, I appreciate the cheap rent and studio space up here. It means I can work on this stuff full time, which I'm not sure I could in London.

If the current pandemic is a song, what song do you think it will be?

Remember that song everyday I'm shufflin? I worked in a bar when that came out and it used to really annoy me. Let's go with that.

What are you currently working on? Any projects we should know of and that you can reveal?

I got a show opening on OCTOBER 30TH at Village in Leeds, a duo with Jack Kennedy. I just finished up a residency with ESA based around artists engaged in counterculture which was a lot of fun too. New work always, more shows next year.

where's the frame - ‘in conversation with’ is a weekly series featuring London-based vanguard artists. Stay tuned for more interviews, published every Friday.