in conversation with: Alice Quaresma 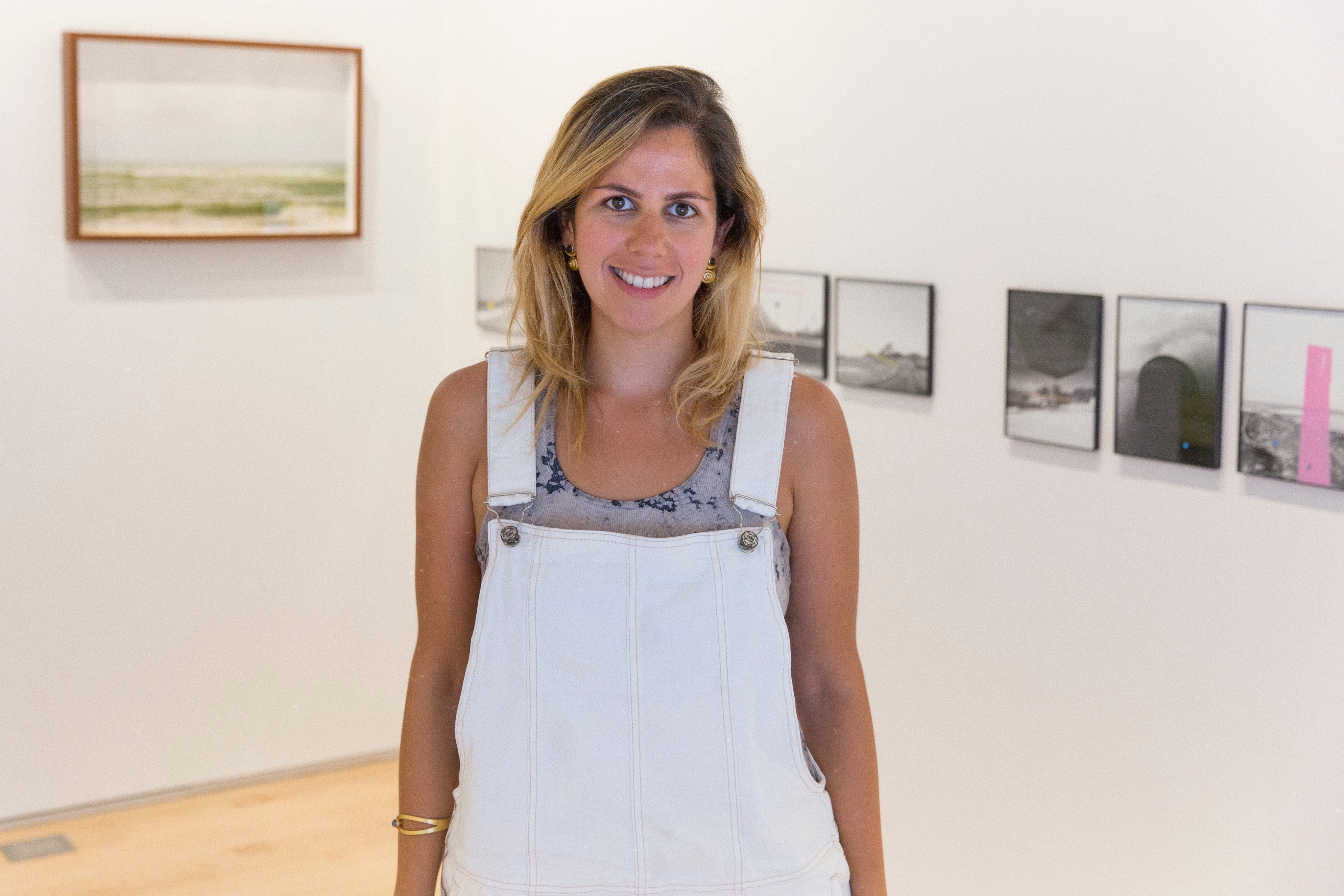 Brazilian New York-based artist Alice Quaresma pushes the boundaries of traditional photography and painting. Her work has been exhibited and collected globally and is represented by galleries such as Pablo’s Birthday in NYC and won the Foam Talent Prize in 2014. Having worked in the art world for over a decade, Alice shared some valuable insights into her experiences with where’s the frame? We spoke about how to deal with the uncertainty of graduating during times of crises, how she arrived at her current practice and the different stages and high points of her career so far. We touch upon her time at CSM in the 00s, graduating from Pratt during the financial crisis and navigating the ever-changing art world in general.

Alice’s fascinating artworks are a combination of photography and painting in which she directly paints on archival imagery with colourful splashes of acrylic paint, pastels, tape, and pencil. By reworking each photograph with paint, she brings more subjectivity, vulnerability, and directness to each artwork. It’s about looking for a sense of place, the manipulation of memory and trying to go beyond the limits of the photo paper.

Being born and raised in Rio De Janeiro, Alice moved to London at age 18 to pursue a BFA at Central Saint Martins. As you can expect from CSM in 2003, it was a very grungy and very exciting time to be there. Majoring in painting, she explained how ‘Painting was a struggle, but a passion.’ Photography was always there, something more comfortable, an ‘escape and comfort zone’ she says. Being dedicated to photography since the age of 15, photography was always present and she was versed in all its aspects - the technical side, the darkroom, how it all mechanically worked. But at that time, her painting practice was a completely separate venture from her photography.

Art in the Age of Crisis

When she finished her BFA, she got into Pratt and moved to New York which has been her hometown ever since. Parking painting for a while, she says, ‘I didn’t touch a brush after CSM’ and she focussed on photography for a while. After graduating Pratt, she stayed within the photography field for a couple of years. Just like right now, what was very defining for her time after graduating, it was a time of crisis. The Financial Crisis of 2008 hit just before and all the subsequent ramifications had a great impact on the art sector. ‘Everything fell apart,’ she said and unpaid internships became the norm ever since. This shortage of jobs and opportunities meant that being paid for work was suddenly not a given anymore and lots of positions were wiped out.

She rolled with the punches. It was clear that you can’t control these things and you can’t plan everything out. She asserts how recent grads must understand that you should re-evaluate your goals at these moments. ‘You shouldn’t be afraid to deconstruct your goals, – when I went to art school, I thought my goal was to create a beautiful portfolio, do exhibitions, find a gallery.’ But it’s not as straightforward, she explains. ‘So much has changed. Photography came and went. Things will always change. It’s all going to change. Whatever my goal was back then is not the goal now, I want other things and that’s okay.’ She continues that it’s important to keep going and not give up when opportunities seem to cease to exist. ‘When we are young and starting in a new field, be open to thinking differently because you can. Whatever you must do, do it. Move back to your parents etc. you figure it out.’ For Alice, it meant going into teaching photography for a bit while she developed her artistic practice.

“Whatever my goal was back then is not the goal now, I want other things and that’s okay”

‘It’s not easy,’ she says candidly. There are not a lot of opportunities and a lot of self-doubts. ‘It’s a lot of no’s and for a long period of time you don’t know what you’re doing, it’s frustrating’. But for Alice, it was crucial to ‘allow myself to be vulnerable, truthful to what I wanted to do.’ She learned so much when she stopped worrying about anything else. And then slowly but surely, things started to fall into place. People around her started to notice her work and recommend her to apply for different things. Getting into the PS1 Lower East Side exhibition program in 2009 was amazing and winning the prestigious Foam Talent Prize in 2014 was of course a tremendous achievement but what people don’t see is that she applied for it four times before. You might just see the prize, but it takes a lot of perseverance to get there.

From time to time, like with her goals, she wasn’t afraid to re-evaluate her practice as well. Having not touched a brush for 5 years, she did a painting residency at  SVA, which helped her deconstruct her photography practice. Having spent two months painting, she thought about what she could take from that process. She started to approach photography as she would do as a painter. ‘As a painter,’ she says ‘I start from a blank canvas, I have no clue what I’m going to do and how it’s coming through.’ She started to think about how this would work with photography. ‘With photography, however, everything is more organised. The concept is all built up, it’s all planned, scheduled and thought out. So, she wondered, ‘How do I bring this level of vulnerability to photography?’ She went all in and sold all her photography equipment and her cameras and simply only worked with one camera and a standard lens. Alice relies on her archive full of pictures of Rio de Janeiro (her hometown) and other places she photographed over time without thinking about a specific project. These are images she had never used in her work before, they were personal shots taken on her time off. Alice continues to build her photo archive until this day. She became fascinated with spontaneous ways of taking a photograph.

‘How do I bring this level of vulnerability to photography?’

Questioning what it would bring her, she realised: ‘it carries my memories’. These pictures were intimate, personal, uncontrolled, emotionally charged, direct and unstaged. It was the complete opposite of the staged and controlled way of how photography usually works. But it also bears the complicated emotional relationship of Rio being a memory, as she is now an outsider. It was an exercise of letting go.

By painting on her archival photographs, it’s about bringing even more subjectivity to them. In this way, instead of a photograph being the end of the memory space, it becomes the starting point. By using images from her personal archive, she creates a more immediate relationship between the artwork and the viewer. But it’s also an experiment with the physicality of the photograph. The work reveals a moment of discovery through the unexpected way the material exists on top of the photograph.

Art in the Age of the Latest Crisis

It’s difficult to talk to artists during the last year without touching upon how Covid has impacted their career. Also, for Alice, being confined to her apartment for months, shows were cancelled, book releases postponed, and she was forced to move out of her studio and to work from home for a full year – it has been challenging. But again, during this crisis, it was crucial to not get trapped in so many constraints. Instead, so focused on what it brought her. Especially when her solo show did happen during the summer, ‘There was such a nice energy. Truly felt compassion and interest. People that have been following my art, told me how much they’ve missed it. There was a more intimate connection between the artwork, the artist, and the viewer. It was very fulfilling.’

‘There was a more intimate connection between the artwork, the artist and the viewer. It was very fulfilling.’

If there is anything we can learn from Alice’s 10 years of navigating the art world is that you shouldn’t set your mind to one track. And although you shouldn’t shy away from reconsidering, re-evaluating, readjusting your goals and practice, you also shouldn’t completely preoccupy yourself with stressing about it. As she said best: ‘When you’re starting out, the one person that can change things, is you.