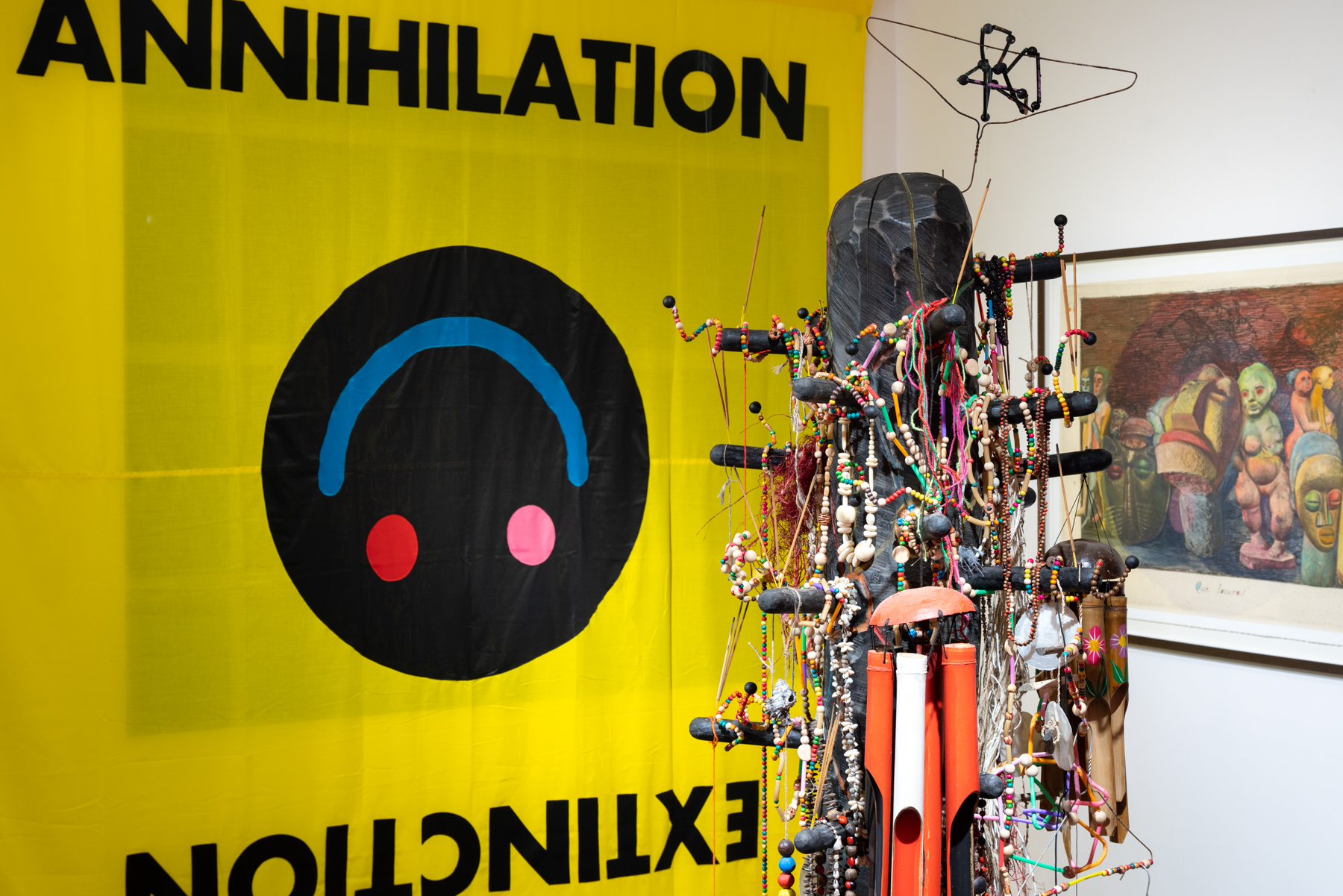 This week the second edition of the London Gallery Weekend is taking place! It’s a free to attend event bringing together over 150 of London's contemporary galleries. Galleries all over town have rolled out amazing exhibitions and are open throughout the weekend. And as most people know, the amazing galleries of the London art scene are spread out from East to West and North to South, so it’s going to be impossible to catch them all. This is by no means an exhaustive list, but here are some exhibition recommendations that we think shouldn’t be missed.

Amy Steel - ‘We Are The Ones Who Know’

In the works by Amy Steel presented by Soho Revue and Purslane, the artist has created sensual and natural environments, feeling like a fresh take on surrealism and female sexuality in art. As put forward by the organisers, ‘viewers are encouraged to explore the limitless potential of female sexuality and identity.’ In these dreamlike paintings, the artist features animals and female body parts melding into the mysterious landscapes in which they inhabit.

Cynthia Daignault's oil paintings on paper in this exhibition hung salon-style, which means scattered around the wall in groupings on different levels. In this exhibit, the gallery itself becomes a metaphor for a digital image array, just like Instagram or Google. Each wall in the gallery represents one work, and after this presentation, the works will then be packed into unique solander boxes that allow the viewer to experience the paintings in narrative time, as when flipping the pages of a book, or scrolling through the stories on a feed.

'Through the Prism' (Group show)

This group show carefully curated by Claudia Cheng celebrates the power of diverse cultural influences in the art sector and features eight female artists from six countries spanning East to West of the globe. Taking an interesting approach to identity, instead of viewing identity as a singular, static concept, the exhibition envisions it like a prism with multiple refracting surfaces – ‘when the light comes through, one can see its full spectrum of colours.’

Presented at PACE’s Hanover Square space are new works by Robert Nava. Referring to mythology, philosophy, religion, and ancient history as well as video games, monsters, and the animal kingdom, he says about his work: ‘I wanted to return to my childhood interests. I wanted to see these fabled creatures in my studio. I’m interested in a new kind of mythmaking, even though there are no real stories behind them yet. It opened up a world of imagination while preserving a childlike drive.’

Jake Chapman - 'Me, Myself and Eye'

In this pop-up show, you can see a new body of work Jake Chapman. Different mediums,  It’s over the top, frightening, grotesque, and funny - all at the same time. Looking at the sculptures, you might accuse the artist of appropriating African art. But as Jonathan Jones writes for the Guardian, "it is a deliberate provocation, part of a crazed carnival of imagery that includes a prehistoric fertility figure and Adam and Eve. It all suggests a neo-rural, 21st-century quest for the primal source of art, or life, while also intimating a dystopia of smiley-faced idiocy." Maybe it’s better contextualised by the artist himself: "If the Fordist machines of mass reproduction had not ground to a halt, allowing the post-Fordist machines of human empowerment to grind on toward sexual liberation and the new circular economy, the world would have been doomed to governance by an elite of immortal corporate billionaires perpetuating their own longevity at the expense of interpolated subjects destined for managed obsolescence—consigned to a glacially slow petering out, assigned to dig holes only to fill them back in again, until they dug one last gaping hole, the one last mass grave into which the last diggers would go—Hi-ho! Hi-ho!—pulling the earth over their heads as they suffocated and perished beneath the topsoil." – Jake Chapman in 2+2=5, published by Urbanomic / K-Pulp

In Invisible Sensations, Sun Woo directs her attention to these unseen constraints and frailties encountered by both our bodies and social bodies, clouded by the reflective surface of technology. Informed by her early and recent medical conditions and the forms of limitations encountered within society, the works in this show present disembodied figures that are obscured, altered, or confined, attesting to their history of struggle or striving to break free. These fragmented parts fill the canvases and corners of the room, responding to their surrounding world and addressing their intimate desires. Cropped-out images of her own bones, hair, and flesh from photographs and scanning devices become visual resources that are digitally reconfigured and merged with images and 3D models found online. Removed from their original context to be reassembled into augmented narratives, these fractured bodies strive to look into their own fragility and endurance, raising questions about the extent to which their unification with technology can liberate or protect them, or transform the atmosphere and territory they inhabit.

Featuring works by Venezuela born (1920-2020) artist Luchita Hurtado, who had explored universality and transcendence in her work for over 80 years, this exhibition shows previously unseen works from Luchita Hurtado’s Sky Skin series. The works in the show centre on the artist’s pursuit of the otherworldly and a broader reflection on life and death.

Where cloudy waters collide…, is an exhibition that brings together works by Merikokeb Berhanu, Nasim Hantehzadeh, Isaac Julien, Abdoulaye Konaté, Tamar Mason, José Vera Matos, and Alyina Zaidi, each of whom explores notions of relation, opacity, and rootedness.

In this solo show by Vivien Zhang, you can see her recognisable abstract layered paintings with digital looking motives in a saturated colour palette. In these paintings, Vivien shows alternative ‘landscapes’. Obviously not in the way you would see on oil paintings at the National Gallery, but rather, she offers ‘topographies that unravel the many, often flawed, means by which we experience our world: geopolitical relationships, social contracts, and personal versus collective narratives.’

Victoria Cantons - 'People Trust People Who Look Like Them'

Presented in the solo exhibition of London-based artist Victoria Cantons is a thematic cycle of paintings from the series, Transgender Woman. In this series of large paintings, she has tracked her own transgender history, to reflect on issues of identity and what it means to be a woman. Click here to read the accompanying text written bij Katy Hessel.

ELSA ROUY - 'I COULD ALWAYS CRACK A JOKE'

This thrilling exhibition presents works by Elsa Rouy that ridicules, empathises with, and embraces the bizarre navigation of the human condition. Taking the viewers through the artist’s introspective exploration and navigation of the self, using the body and its corporal properties to express ideas centred around separation, sexuality and dependency, viewers are getting an honest perspective on the human condition.

Eva Gold’s sculpture Cowboys, is a row of thick black cryptoleather jackets hanging from the wall. The work is about the presence and absence of sex. It also suggests this presence in what they missing: men to wear them. As writer Huw Lemmey writes: ‘Constructed from industrial building materials - the stuff of roof linings and waterproofing - they speak to the heavy, haunting presence of sex, of the potential of many bodies in contact with each other, like men at a urinal trough. That potential is erotic, political, even spiritual; to reimagine how we interconnect. The thick membrane of Gold’s coats should reject osmosis. In its intended industrial form, as roofing, it rejects the fluid and forces it in other directions. In these massed ghosts, however, it suggests something more fungible, a sexual spectre of the possible, of the night that’s yet to come.’

Cecilia Fiona - 'Weightless are the Hearts of the Trees'

In this exhibition of new paintings by the Danish artist Cecilia Fiona, Annka Kultys presents eight of the artist’s immersive rabbit glue paintings that explore the mythical ecosystems where man and nature melt together in a fantastical world imagined by the artist.

In this solo show, the beautiful paintings created by Pam Evelyn have an interesting subject matter, as the artist reflects on the material clay. Like the geological composition of the city of London, clay is volatile and unpredictable, it shrinks and expands depending on its water content, imbuing it with the capacity for collapse. Evelyn’s painting process shares similar qualities, the title becoming a comment on the work itself. From the moment she approaches the canvas, Evelyn begins with a problematic and challenging foundation, an untackled and incalculable terrain. Yet, through placing trust in her own intuition, following her own painterly impulses, Evelyn builds – brushstroke by brushstroke, layer by layer, ‘brick by brick’ – a densely rich and textured canvas.

This exhibition works around the notion of absence and presence and their relation. Highlighting the forces we don’t see, at the heart of this show is the paradox that absence may be the sharpest manifestation of presence.

Rhea Dillon - 'The Sombre Majesty (or, on being the pronounced dead)'

In this exhibition, London based artist, writer and poet Rhea Dillon takes Stuart Hall’s 1996 essay 'Cultural Identity and Diaspora', in which he argued that cultural identity is not only a matter of a 'being' but of 'becoming', 'belonging as much to the future as it does to the past’, and takes his writing on Caribbean identity as an organisational framework and proposes categories for understanding Caribbean diaspora culture.

Intimacy, vibrancy, and effortlessness, the captivating works by Navot Miller, curated by Russell Tovey, strike a chord. You feel like you’re there with the people depicted in his paintings. It might not come as a surprise that the painter is an avid photographer and videographer as well, as his work can appear as snapshots of intimate moments.

Natalia González Martín — 'A change (would do you good)'

ancient and contemporary worlds, mythic stories with popular culture and subtle imprints of her own personal experience, and thereby shows the everlasting power and symbolism of mythology. Very interestingsly, fhrough a reading and reimagination of Ovid’s Metamorphoses — the famous poem in which the Roman poet chronicles the history of the world from its creation to the deification of Julius Caesar within a loose mythico-historical framework — the artist uses its tales of transformation to explore universal subjects of mutability, love, passion and power.

The works in this show, are created in a very unique way. Tim Garwood has created 7 reverse-glass paintings which means he made this with a back-to-front process, in which the 'top' layer is painted first, the 'background' last - one neon work, and one on canvas. It’s about love and fascination with the texture and materials of everyday life. From lace curtains from the Deptford market to Ikea tablecloths, to the hi-tech flawlessness of glass surfaces, all in contrast with the all-presence of the glass screens of our phones, tables and laptops.

Main image: installation view Jake Chapman - 'Me, Myself and Eye' at Paradise Row Projects. Courtesy of the artist and the gallery. Photography by Mirko Boffelli.