From the dematerialisation of art to NFTs 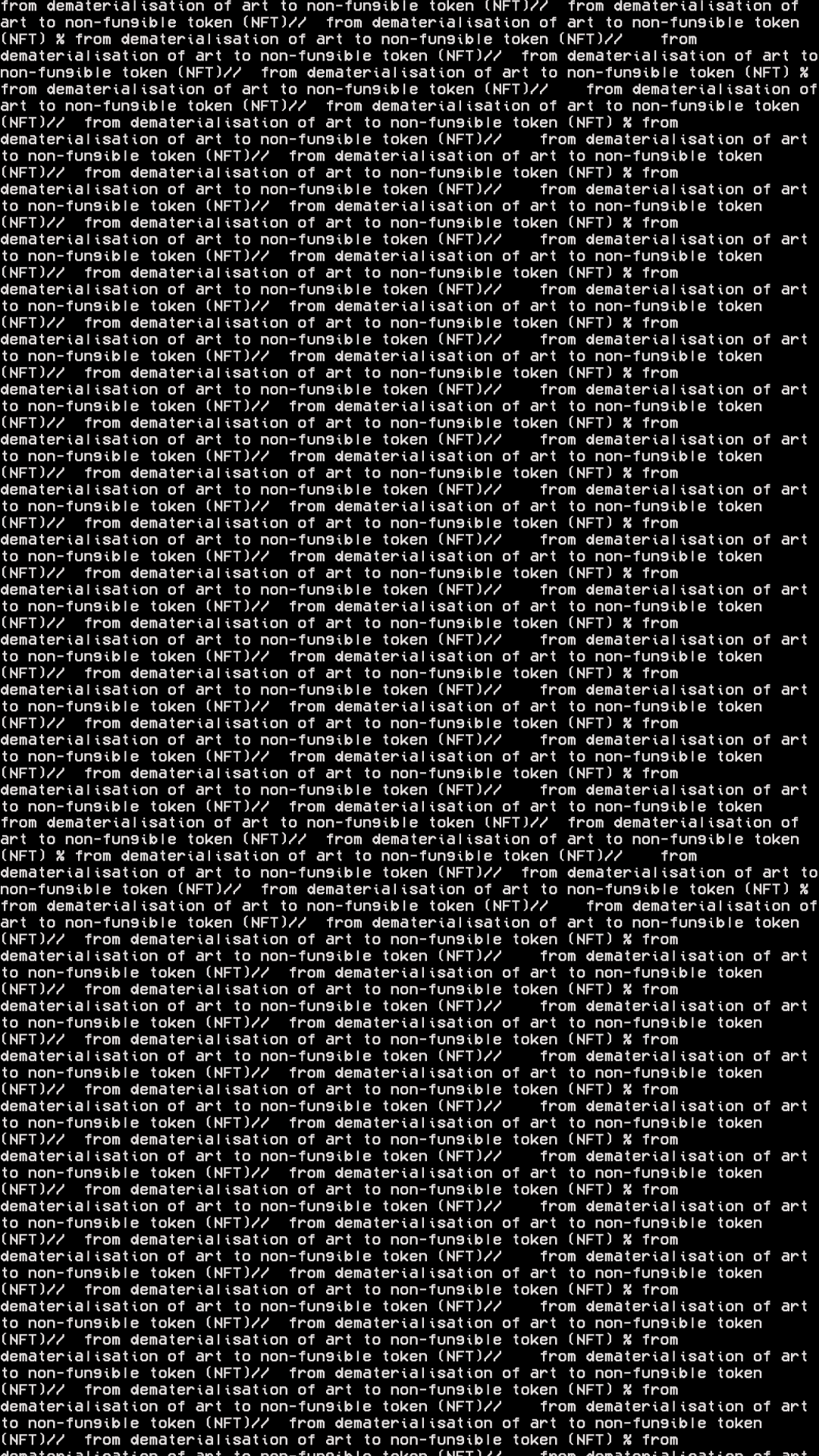 It’s 1917 in New York City, and an artist submits a urinal turned upside down with ‘R Mutt’ scribbled on the bottom for exhibition at the Society of Independent Artists. Although this society claimed it would show all submissions, that declaration went out of the window as soon as they saw this entry. It’s for academics to decide who this artist happened to be (we think it’s Baroness Elsa von Freytag-Loringhoven and not Marcel Duchamp), but anyway, it changed art history. Opening the floodgates for artists and movements, artists started to push the limits of what art can be. Conceptualism - idea-based work - started to rule. Conceptual art is basically the idea that ideas can be works of art. And - what art critic Lucy Lippard famously coined - the ‘dematerialisation’ of art followed.

Some believed this would be the end of the commodification of art because it would cut out art dealers as they cannot sell, and collectors wouldn’t buy art-as-idea. But think again, that didn’t happen. Art history has known patrons that supported artists for hundreds of years, and art collectors found a way to go with the flow.

When the concept and not its physical materiality is the most essential aspect of a work, you can still collect it. Artists like Sol Lewitt, an artist famous for his wall drawings starting in the 60s, sold the instructions to ‘install’ his works and those instructions became the artwork itself. And even if the works are more sculptural but made of cheap perishable materials such as Dan Flavin minimal sculptures made of fluorescent tubes in the 60s, it was still the concept that counted. As is the case with a lot of minimal art, it was about the relationship between his sculptures and the spaces they inhabit. And that concept doesn’t run out of light.

More recently, Maurizio Cattelan’s ‘Comedian,’ another perishable artwork, went viral in 2019. It was - pretty annoyingly - the most talked-about artwork of the year and was a conceptual work of art that involves a banana duct-taped to a wall. And it has become part of The Guggenheim Museum's collection as an anonymous donation.

And in these examples, there is still some materiality involved. Really pushing the dematerialisation is Tino Seghal. His ‘situations’ are performances strictly carried out by ‘interpreters’, not the artist. A situation could be that in a museum, an interpreter dressed as a guard starts dancing for a museum go-er and ends the dance by saying what’s usually written on a wall tag: ‘Tino Seghal, This is Good, 2001.’ He gives art a new material foundation: the human body and nothing else. So the material object is exchanged for a situation between two people. And he does not allow any documentation of the work. Nothing at all. Even when he sells a piece, the notary cannot write anything down or sign anything. So the selling of a work by Seghal occurs by him whispering the instructions in the collector’s ear and requires a lawyer or notary willing to witness and approve it. And yes, museums and private collectors collect his work (which are sold in editions, and Sehgal preserves an ‘artist’s proof’).

In all of these cases, there is some form of ownership that is not about the physical materiality of the artwork itself. In the case of Lewitt, there is the owner of the instruction. And with Flavin, he provided the collector with a certificate containing a diagram of the work, its title and the artist's signature and stamp. In the case of Seghal, the owner of the situation is the legal owner. If a museum or gallery wants to display the situation, they must request a loan from the collector. In the last example, Comedian, we’re not getting into the price it was listed for but we just want to mention that, also, in this case, the owners (yes plural, the gallery sold this piece in edition + 2 artist proofs) are the owners of the concept. When the banana is gone (eaten or rotten away) the concept of the artwork is still very much intact.

This brings us to Non-Fungible Tokens, or NFTs as they are popularly called, which are generating a lot of debate. In a nutshell, NFTs are part of the Ethereum blockchain. Blockchain is a growing list of records that - by design - are resistant to modification of its data. So NFTs are verified by blockchain technology that represents a unique digital item, and thus they are not interchangeable.

NFTs can represent all sorts of digital files and creative work. Because it’s not interchangeable, it can’t be replaced with something else, which means it’s unique. Once an NFT is created, it can be digitally traced forever. So unlike a regular file, NFTs can’t be duplicated, giving it a similar or even more protected status to an original artwork. So an NFT harbours the authenticity of, let’s say, a digital artwork that comes in the form of a JPG or GIF. And blockchain opens up a lot of overdue possibilities for royalties for artists when a piece gets resold.

Owning NTFs are not that curious after all?

Without delving into the many consequences that have been trending in recent weeks, collecting NFT’s has been subject to scrutiny. Hitting tons of headlines, granted, a lot of attention is given to the mindblowing $70 million sale of an NFT by Beeple which horrendously turned out to include sexist, racist, xenophobic imagery. But beyond this sale,  NFTs themselves are heralded as the latest artworld craze. Yes in some ways it’s the new frontier in the arts. But if anything, the long run-up of decades the dematerialisation of art in which traditional ownership of a work of art has been bent over backwards collecting NTFs isn’t that curious. Art hasn’t been solely about physical materiality for over 50 years. And as a result, in some cases, collecting art is not bound to the physical materiality of an artwork either.

And because where’s the frame? is all about supporting artists and experimentation; we’re thrilled to share that we’re selling NFTs of our gallery artists Taylor Bystrom and Sian Fan on OpenSea.