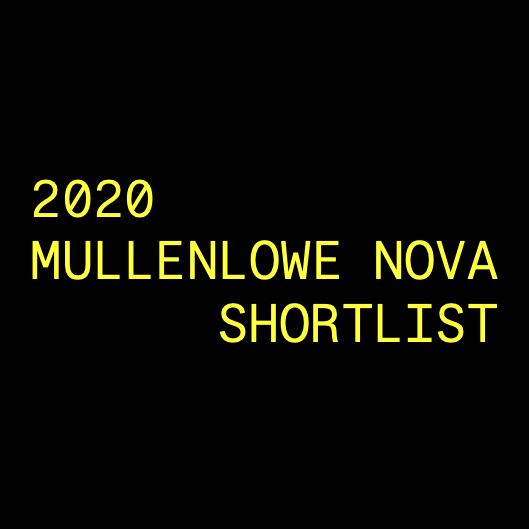 From CSM’s 1,300 graduating fashion, art, and design students, this year’s judges of the MullenLowe’s NOVA awards have shortlisted 14 creatives for the prestigious award. Of those, only 5 MullenLowe NOVA Awards will be handed out to the students who are pushing the boundaries of freshness and creativeness to the max. Over the last couple of weeks, people have been voting for their fav piece of work from the shortlist and the winners will be announced in an online ceremony next week Thursday, Sep 10th. The student with the most votes will be crowned the ‘YourNOVA’ winner for 2020 and take home a prize of £1,000, so you can make a big ass difference in supporting them by taking things further in these difficult post grad times. Oh, the suspense! We’ll touch upon the practice of these shortlisted creatives to enable you to make a more informed choice.

Actively working against perfection, Femi’s digital art, pixelated and imperfect, with error message and all, functions as a reflection of a flashforward to a future of decay. She has said: ‘I do this because I suspect that the digital is in need of being remediated – particularly for its disposable feature which is a forgetfulness that maintains a feeling of displacement.’ At the same time, it also exposes the way her body has changed over lockdown and imagines what it could become.

In this digitised performance, Aziza focuses on post-communist realities and confused cultural identities in which traditional lifestyles, Soviet ideology and Islamic values are tangled up. In the form of a 50-min storytelling session, she explores questions such as ‘what is identity’ and ‘what is home?’ Based on her personal experience in Uzbekistan, China and Russia, she draws attention to the topic of migration in Central Asia and exposes the peculiarities of a migrant identity while playing with exaggerated Western performance clichés.

Set in 2025, Ines tells the story of a post-Covid era, in which we are facing the ramifications of the lockdown as our immune systems have weakened. Fortunately, scientists have found out years ago that pluripotent stem cells can be found in huge quantities in menstrual blood. With Ines’ ANEO, a wide range of women can collect their menstrual blood at home via a kit and send it to a laboratory in order to bank it in a menstrual blood bank. And alas, contributing to effectively treating an extensive range of diseases, in the future, our own menstrual blood is saving lives.

Investigating the ways Black British people have been excluded in history, Jahnavia probes new methods of visibility and representation. She has created a five-metre-long quilt to make visible the many unrecognised Black people that contributed to British society during the 17th and 19th centuries. She left it unhemmed, leaving it incomplete, symbolising the many people that are yet to be discovered and added. Anybody deserving recognition can be submitted. Hereby, Jahnavi has dismantled the “single story” which suggests that Black people only arrived in Britain after World War II and also the idea that Black people in Britain during the 17th and 19th centuries were only of a subservient status. In an accompanying directory, the audience can discover the stories of the represented people.

Jo’s project for the graduate show is very relevant in the current world that we live in. Finding solace in washing hands to diminish the chance to contract COVID-19, Jo’s ‘Rinse and Repeat’ mini stone sculptures aim to elevate the now every minute practice to an even more relaxing experience. Inspired by how human behaviour keeps on evolving based on the current state of society, her investigation continues to explore the complex fight of the world’s current invisible enemy.

‘Lokko’ is Bates’ mother’s maiden name. As a mixed-race, Bate grew up surrounded by his white family members and went to a majority white school. In this project, he explores and performs the inevitable side of being white – the privilege and other manifestations of the behaviours that cater to the white gaze.

A dystopian project where clean water ran out, ‘Aqua No More’ provides a clear simulation of how England would be if that were to happen and the ramifications to society. The project is narrated with a series of voicemails, completed with posters and graphics that includes multiple logos of government bodies, including the NHS logo. As the issue of clean water is everywhere, not only the problems of developing countries.

Influenced by Aesop’s fable The Wolf in Sheep’s Clothing, ‘Wolfskin’ is a film that combines symbolic imagery and conventional storytelling to convey how a certain performance could help one’s acceptance in a society. In Fabian’s film, performance and superficiality do not cut it. Influenced by historical imagery of public executions and current rallies that often led to violence, Fabian agrees that ‘…all it takes is a large crowd and a common enemy’.

Kyriakou imagines a new city, where the praxis surrounds the thriving LGBTQ+ community, especially the gay drag culture. Inspired by two historic literary works – “Utopia” by Thomas More and “The Book of the City of Ladies” by Christine de Pizan, Kyriakou unpacks conventional structure and turns London to an augmented version of Strawberry Hill House - a famous Gothic villa created by Horace Walpole.

Hubei-native, Liang Xiao experienced the pandemic both in Wuhan and London. Her intense and unique account led her to create a project where she combines the human experience with the scientific narrative behind the disease itself. With limited resources she taped a performance in her own balcony, an only place where some could get fresh air during months of lockdown. She translated her experience to four different artwork - ranging through posters to video.

Innes poses a question, ‘is it possible to imagine a prison-free society?’. Prison is one of the oldest modes of institution that has the same structure as it was 200 years ago. The need to reform in order to create a deterrent effect towards committing a crime is not guaranteed with the current system. In this project, Innes focuses on London’s oldest category-C prison, HMP Brixton as a way to create an alternative future for individuals that are disproportionately affected by the cycle of crime and incarceration. In a form of graphic novels to provoke more imaginative possibilities.

Partly physical and partly augmented, Rougier plays with damaged data and its restoration as a form of creation.The process of digital manipulation created pixelation,  as the aesthetic of the entire collection is based on upcycling vintage through modular augmented reality. The collection might work like Legos, where you can take them apart and reposition them again.

Rummaging through more than 200 pieces of archive filled with collective memories of Angola’s past, Poulson’s ‘An Angolan Archive’ investigates how mundane things that can be found in a typical Angolan household is confronted to the family’s history and the genealogy to colonialism. Captured in a roof terrace of Poulson’s neighbouring building, the project decided to occupy it, as Poulson’s studio, medium, and to an extent a subject. Poulson decided to embark with the praxis to decolonize and to highlight that her ongoing task is not a trend.

A quest for sustainability, Yi Yin has been reinventing, restructuring and reusing ceramic waste. The search culminates in outdoor furniture that is bespoke in nature, as a way to introduce a new value of waste. It is known that the global ceramic waste reaches 22 billions tons every year, where China alone produces 9 million.

So what are you waiting for? Go vote vote vote!